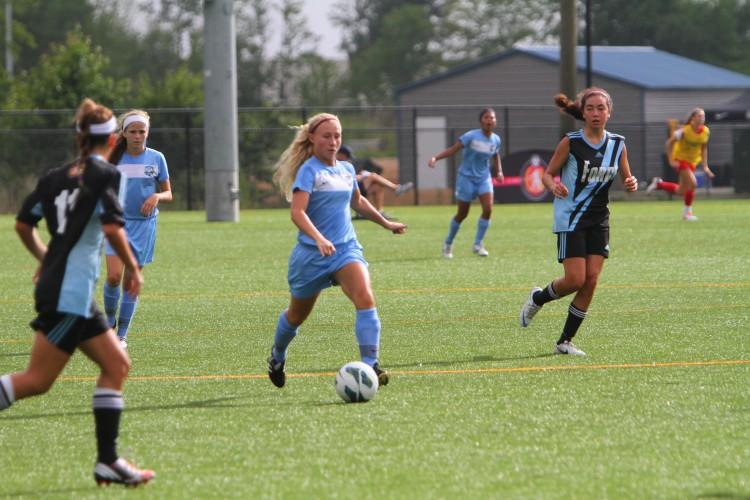 Sophie Roux competed at nationals in Aurora, Colorado, during her 2012-2013 MTA season. As a freshman, Roux had 14 points in 16 games, while playing for BSM.

Sophie Roux finished her freshman season as an emerging star for the state champion Red Knights. As a sophomore, however, she is no longer in a Red Knight jersey. Along with fellow sophomores Taylor Gelling and Kippin Keller, she has taken a different route to soccer success by play- ing for the Minnesota Thunder Academy.

Minnesota Thunder Academy is the only club in Minnesota to have teams hosted within the Elite Clubs National League (women’s) and Olympic Development Academy (men’s). Sophie’s father, James Roux, was one of the founders of the pro- gram and has been involved with MTA for

25 years and counting. “This was a very dif- ficult decision made in order to give them the most exposure for a collegiate opportunity,” Mr. James Roux said.

As a part of the ECNL, traveling is a huge part of playing for MTA, playing league games in Chicago, Milwaukee, St. Louis, Kansas City, and Denver. They play in national events in California, New Jersey, and Virginia. The schedule is rigorous, as the ECNL season ranges from late August through the following June. They most recently had games on September 21 and 22 in Germantown, Wisconsin

All three girls play for the 2013-2014 Minnesota Thunder Academy U16 team. The team is a part of the Under 16 Midwest Conference within the Elite Clubs National League. There are five other teams in the conference, with two teams from Michigan (Vardar, Michigan Hawks), two based out of Chicago (Eclipse Soccer Club, Sock- ers FC), and the other from Wisconsin (FC Wisconsin Eclipse).

Due to all of the traveling that corresponds to playing in an elite league like ECNL, the players are exposed to all sorts of collegiate opportunities. According to the MTA website, ECNL players are ex- posed to 400-500 college coaches throughout the regular season and during showcases. “We have had as many as 35 Division One coaches at one of our games and had seven players already commit prior to their Junior year from the U-17 team,” Mr. James Roux said.

The Elite Clubs National League is under the direction of Commissioner Sarah Kate Noftsinger, who played Division One at Wake Forest University. Jay Howell is Ex- ecutive Director and Cynthia Hessis the Director of Operations for the ECNL. Each conference has its own director, with Rory Dames as director of the Midwest Confer- ence.

“The academy has great soccer training, and if you want to take your soccer game to the next level, it has great exposure,” Keller said.

Roux sees a return to the Red Knights in her future and plans to come back for her senior season. “I love and miss being with them all! They’re an epic bunch of girls, I’m forever a red kitten,” Sophie Roux said.