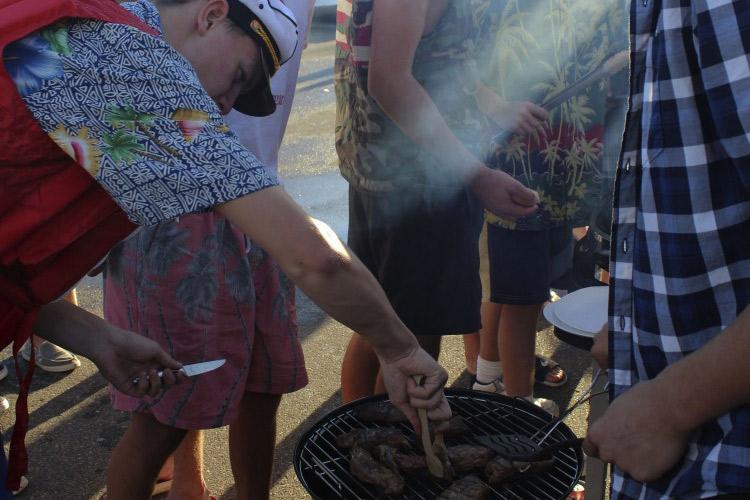 Harry Grones (12) and fellow tailgaters have used a small grill as a large attraction.

The Benilde-St. Margaret’s class of 2014 have challenged themselves to outdo last year’s seniors in super fandom by taking the pre-game tailgates to the next level with social media, various themes, and plenty of refreshments to attract more students to this year’s football games.

Tailgating promotes and shows fan support for a sports team, and the students at BSM have been continuing this tradition for years. In past years, the tailgate parties have consisted of a few seniors who grilled some food and enjoyed a bit of music, but this year’s upperclassmen saw the opportunity to heighten school spirit by hosting a series of extravagant tailgates at home and away football games, and even before school. “We just thought it’d be fun to grill before school, what with all the festivities during Homecoming week,” senior Zach Harrison said.

The seniors are hoping to include more students in this year’s tailgates. They successfully hosted a huge pre-game party at Cooper High School on September 6. The new idea for more inclusive tailgates was sparked by the desire to raise the bar for this year’s tailgates by outdoing those in the past. “Personally, we want to beat the seniors from last year as far as super fandom. So far, we’re off to a good start considering the big turnout at Cooper,” said senior Harrison Grones.

The first home football game against St. Louis Park started off with a beach-themed tailgate in the parking lot with over thirty kids dressed in Hawaiian shirts and other summer related attire. “The beach theme was sparked because we asked ourselves, ‘Who doesn’t have a Hawaiian that they could pull out of the closet and look ridiculous in?’” said Grones.

Even though the size was below expectation, the students who came enjoyed lots of fun activities, such as grilling flank steak and other various cuts of meat. With the back of a pickup truck converted into a tiny swimming pool, a few “beach-goers” and “life guards” equipped with kiddie pool toys enjoyed a comfortable dip in the ice-cold water. “We had all the grades there and everyone was just grilling, eating, and hanging out, which is really what its all about,” Grones said.

The seniors hope to continue the crazy tailgate themes later in the season, with even more extravagant activities like a taco bar. “For the last home football game, we’re hoping to do a taco tailgate with a taco bar and everything,” senior Jake Donlin said.

In order to create the best tailgates in school history, the seniors plan on using social media to notify the BSM student body of the upcoming tailgates. Students can look for the themes and different details through Facebook and by following @BSM_SuperFans on Twitter. “Just come even if you feel awkward,” said Grones.