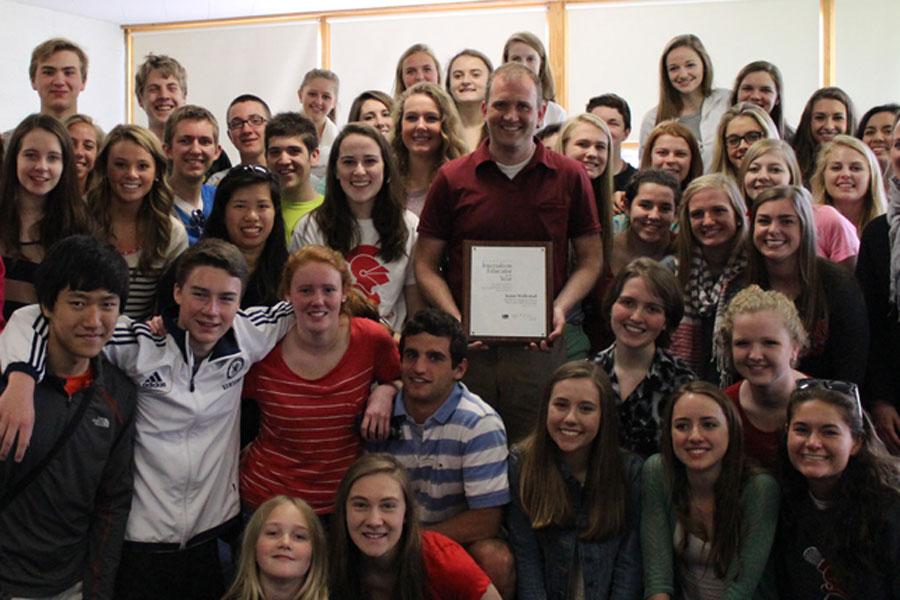 Mr. Wallestad was surprised by the award, when representatives from Minnesota High School Press Association, family , and recently graduated students delivered during class.

Knight Errant advisor Jason Wallestad was awarded the Minnesota Journalism Educator of the Year Award from the Minnesota High School Press Association on Friday, May 24th. Every year this association selects one nominated educator for the award.

This year, Dr. Sue Skinner and Online Editor-in-Chief Giulia Imholte both wrote letters nominating Mr. Wallestad. “Mr. Wallestad really made sure that the students were in charge of the Knight Errant. He created an environment for his students that allowed them to have a leadership role and feel completely responsible for the work that was done,” Giulia Imholte, recent graduate, said.

With his innovative approach to teaching, Mr. Wallestad’s program allows students to run the school publication. He makes sure that the class is not about the advisor, finding it necessary that the editors choose the content, and the writers create it.

Mr. Wallestad’s truly student-led program sets him apart from other journalism educators; this was the factor that allowed him to win the award this year. “Mr. Wallestad stands out because of the work he has done with students at Benilde-St. Margaret’s to help them create an active, dynamic student news website,” Logan Aimone, executive director of the National Scholastic Press Association, said. Mr. Wallestad teaches through example, and then allows the students to experiment for themselves. “It’s clear that the guidance and leadership he provides allows students to excel,” Aimone said.

Mr. Wallestad also keeps up to date with new innovations and updates in technology, in part due to his other position as co-founder and co-owner of the organization School Newspapers Online. “He really knows his stuff. He constantly finds different news websites to show where new developments are happening. Mr. Wallestad understands real world developments and implements them into the classroom,” Imholte said.