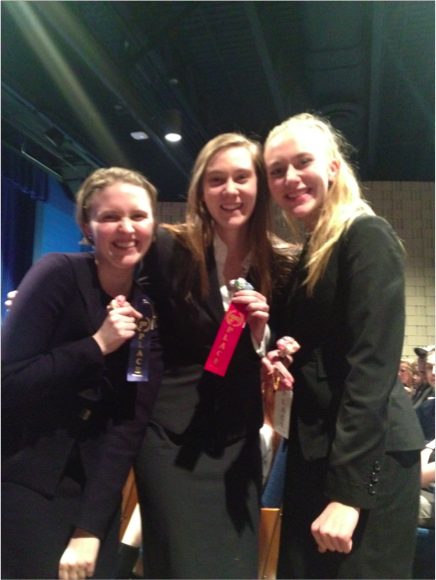 Junior Laura Shannon (left) placed first at both the conference and section tournament, only to be shaken up at State by a plagiarism scandal.

When junior Laura Shannon and the Benilde-St. Margaret’s speech team left for the state tournament on Friday, April 19, they were not prepared for the scandal that would rock them later that day. During one of that day’s rounds, a fellow competitor from Roseville, stood up and gave the speech that Shannon herself had written just before she was to perform.

As the incident played out, the astonished Shannon could do nothing but watch as her creation was being stolen before her eyes. “I knew she had the same topic as me because it was on the program, but I was shocked when she begins giving word-for-word my intro… I was horrified. Of course I was the next speaker, and I wasn’t sure what to do so I got up and gave my speech, which was awful because my legs were shaking, I was choked up, and everyone thought I was the copier because I went after her,” Shannon said.

Within the category that Shannon competes, participants must write their own eight minute long speeches. These are then used by the authors throughout the entire season, subject to change and improvement. The “speechers” spend hours after school perfecting every pronunciation, every facial expression, every pause, which makes the situation even more trying for Shannon.

“I think anytime you spend so much time working on something or really anytime you write something for personal use, it’s very violating for someone else to take it without your knowledge and consent. Aside from that, there were a lot of personal anecdotes and stories about my life that she was passing off as her experiences,” Shannon said.

“She should also be comforted by the fact that, as was remarked at the time, her speech was so good it made it to State twice. But, regardless, Laura deserves recognition from the mature and poised way in which she handled this most difficult of ordeals,” said Mrs. Maura Brew, head coach of the Speech team.

And it is because the speech was written by Shannon and included such personal details that the experience took such a toll on her nerves and emotions. After the round, while searching for help, she couldn’t help but break down into tears at the thought of her tarnished chances at advancing further at state.

“My first concern was Laura, so before even contacting the authorities, I made sure that Laura knew we would take care of this, and that she should just try and stay as calm as possible going into her third round,” Mrs. Brew said.

Such an upset did not go unnoticed by the judges. “I was ranked last in the round I had with the girl, which is one hundred percent due to the fact that it looked like I may have stolen her speech. Judges are supposed to disregard any broken rules when ranking, and then report it so the board can handle it in whatever way they intend, but I don’t blame her at all… It did kind of suck because if I had gotten the rank I would have gotten otherwise, I would have possibly medaled,” Shannon said.

The speech team rallied around Shannon while she dealt with the distressing situation. “I honestly have the best teammates in the world,” Shannon said. Her coaches and other acquaintances also used their best efforts to find a solution to the situation, and the other contestant was disqualified.

“The MSHSL State officials say they have never encountered a situation like this before, so perhaps Laura might take some solace in the fact that she has made State history,” Mrs. Brew said.