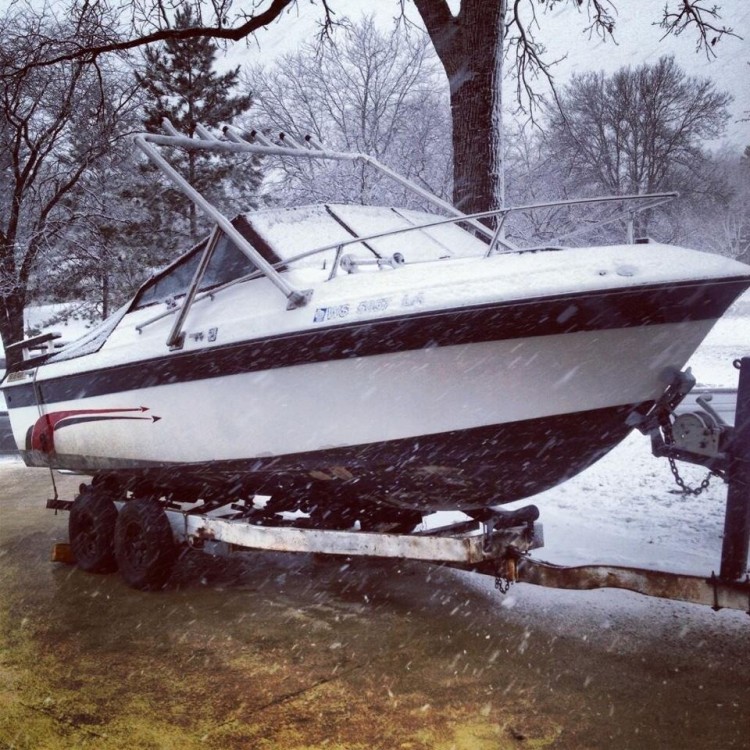 Fifteen senior boys each pitched in $100 to purchase a boat they hope to use daily during this upcoming summer.

“It’s a solid vessel and we’re pretty sure it floats,” said Senior Michael Nanne. A description any responsible boat owner should utter when discussing his watercraft. With persistent Craigslist patrolling, Nanne found the key to a senior summer that will go down in the books: a 1979 Beachcomber.

The boat, found on Craigslist for $1500 was exactly what 15 seniors needed to make the most of their last high school summer. Formerly named “Fatal Attraction,” the new name may not be print-appropriate, but the vessel is still loved by all.

The group of friends have been planning this for years. The list of ridiculous desired purchases went from a community car to an icehouse. “We actually almost bought a house on Craigslist for $800,” Nanne said. The list finally ended with a boat, and after a failed attempt at landing (no pun intended) the highly desired “Sealark,” a $500 boat, Nanne found “Fatal Attraction” in Cannon Falls, Minnesota.

The price of the new boat, which costs three times as much as the “Sealark,” was split up between 15 senior boys. “We paid in cash, and everybody had $100 to give,” senior Arthur Boyle said. Everybody. That is, except for Boyle, who apparently has not yet paid his share, which has put Nanne on edge. “Has Arthur paid? No,” Nanne said in an irritated tone.

The 50 minute drive to Cannon Falls was made by TJ Moore, Sam Haferman, Grant Besse, Grant Kellogg, and Nanne, which resulted in not only purchasing the boat, but getting a free dirt bike and Michelin Man lamp as well. “It took a while because one of the tires [on the trailer] had a hole in it and it took him like an hour to get back, and since the guy said we’d probably have to replace the tires, he threw in a free dirt bike with it,” Nanne said.

When catching first sight of the boat, the seniors knew it was exactly what they had been looking for. “We got there and we knew it was perfect,” Nanne said. But don’t let the optimism fool you, it’s still a 1979 boat that has seen better days, and according to Boyle, “It looks really good with the cover on.”

“We don’t want a nice boat because that would cost a lot, but it’s at the point where we can make it our own and work with it,” Nanne said.

Senior John Backes plans to house the ship in his backyard and though he jokes about sleeping in it all summer, don’t put it below him. “It’ll actually be John’s house for three months,” Nanne said.

They plan to go out to Lake Minnetonka almost everyday and joy ride around. “Whenever you wanna go out on the boat, go out on the boat. But don’t drive too fast because we don’t have any money for gas,” Boyle said. Of course this spurred another offhand comment from Backes. “Oh, is Arthur in charge? I guess I wasn’t made aware of that.”

Tempers may flare at the moment, but in the end, the boat will be a sign of unity for the 15 seniors who leave for college at the end of summer. With the plan to add a “sweet stereo system” and mount paintball guns on, as well as decorate it with the Michelin Man lamp and a provocative flag, there’s no way a grudge could be held for long.

The status of the vessel after their departure is still undecided. At first, the plan was to sink the boat, but that would be a felony, which didn’t sit well with Nanne. “We’re thinking about passing it down,” he later admitted.

No matter what the outcome of the boat, there’s one thing that is definite according to Nanne. “It’s gonna be one heck of a summer.”