Seniors come face to face with the college decision

With only a week and a half left before May 1, also known as National Decision Day, some seniors are still struggling to choose where they will study next year. 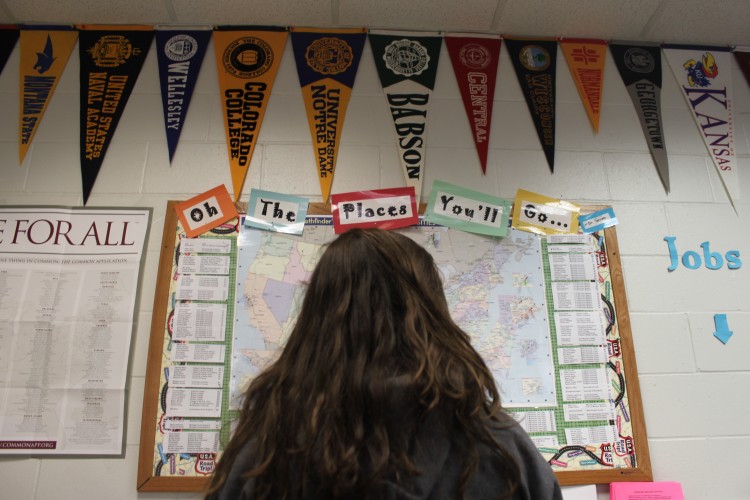 The college decision is all about the student, not the notoriety or rank of a college. It’s about fit and experience and the right school might be found close to home or on one of the coasts.

“I definitely would [recommend Early Decision]. It was nice knowing in December that I didn’t have to look anywhere else and my twin brother also applied early decision, so that was nice on our parents too,” Carras said.

While early decision is not for everyone––especially for people like me who fear the idea of committing early and regretting it later––it can be beneficial.

There are hundreds of options, probably dozens that could work, but eventually it all comes down to one. I started early, visiting my first schools after my freshmen year of high school. Through what I considered to be a very intense process of elimination, I created a list of 45 schools. And in hindsight, it’s hard to imagine I got it down to one.

I found three schools that “fit”; three schools where I know I would’ve found success and happiness. Two of these schools were reach schools and one was a target. Ultimately, I applied to ten schools––three safeties, two targets, and five reach schools––definitely contributing to the 6.2 school average achieved by the BSM class of 2013.

Roughly 75 percent of each senior class takes advantage of some kind of early plan. “I know I wrote at least 50 letters for that November 1 deadline,” college counselor Ms. Amy Larson said. “I think students should have at least one school where [they] are going to find out before Christmas, like rolling admissions schools.”

Through early plan programs, Joe Pauly had his prospective school list down to three by early February, having trimmed his options to Marquette, University of Oklahoma, and University of Texas-Austin based on cost, scholarships, and other important variables.

In my experience, early plans can decrease stress and make the application process that much easier. I applied to three schools by November 1, two by December 1, and was accepted into four by winter break. One of my early schools was University of Chicago, one of my top three choices and an option that allowed me to eliminate colleges I wasn’t head over heels for. Hearing back from schools before the dreaded regular decision deadline of January 1 allows students to evaluate their options in advance and potentially narrow out a few applications.

Though applying before November 1 helped Pauly narrow his options, he was working from a fairly narrow field to begin with. In the summer before senior year, Pauly started evaluating his college options and his father actually piqued his interest in the field of petroleum engineering.

Ultimately, it was the University of Oklahoma’s academic structure and opportunities that attracted Pauly. “They have some equipment at Oklahoma that they don’t have anywhere else, so out of college I would already know how to use the equipment so it’s better job placement,” Pauly said. “[Oklahoma] has this program where you combine your petroleum engineering degree with your MBA. So, instead of six years it would be five years, and the MBA is energy focused.”

Pauly made his final decision right before spring break, about the time his peers were starting to hear back from their regular decision schools. Claire Larson, who prior to the regular reply dates narrowed her selection down to three schools––University of Wisconsin, Madison and Miami of Ohio, was accepted into Boston College.

“Junior year I thought if I got into BC that’s for sure where I would go and then senior year I was kind of convinced that I wouldn’t get in so I started looking closer at Miami and Madison, and then when I got in, it was kind of a shock and I had to add it back into the mix,” Larson said.

Larson, like Pauly, has a pretty clear idea of how she wants to focus her undergraduate studies. Though there is nothing wrong with applying as an undecided major, I found that having a general idea of the field of study or possible job that interested me really helped in narrowing down what school locations, academics, extracurriculars and career opportunities would be most beneficial for my future.

“I applied to University of Minnesota Carlson School of Management, Xavier, Marquette, Northeastern, Boston College, Miami of Ohio and Madison and I’m deciding between Madison, Miami and BC. What I like with all three of them is that they have great business schools which is what I’m interested in,” Larson said. “So, basically, what I’m trying to decide between is how much each one of them costs and the business schools and how high they’re rated.”

The factors Larson is taking into account for her decision are common––the financial demands of a certain institution and how the cost translates to the quality of education. While these were factors in my decision, I took a few other important things into account, like alumni networks, location, journalism opportunities, art opportunities, the culture of nearby cities, and intellectual and social environment.

I knew that wherever I got in, I would be happy. I didn’t apply to my safety schools just because I figured I had a good chance of getting in. I found schools with specific programs and opportunities that were attractive to me. I didn’t just apply to a reach school to see if anything would come of it, I researched and visited and did everything I could to demonstrate my interest and knowledge of each institution.

I exited the application process knowing that I did everything I could to get into any of my schools––I spent the same amount of time on my essays for my safeties as I did for my reaches. When that April 1 reply date rolled around, some replies shocked me, but none upset me.

I entered April anticipating my decision: no regrets, no bitterness, but definitely stressed with my fear of choosing wrong. In the end, I made my decision faster than I thought I would, committing to the University of Pennsylvania on April 11.