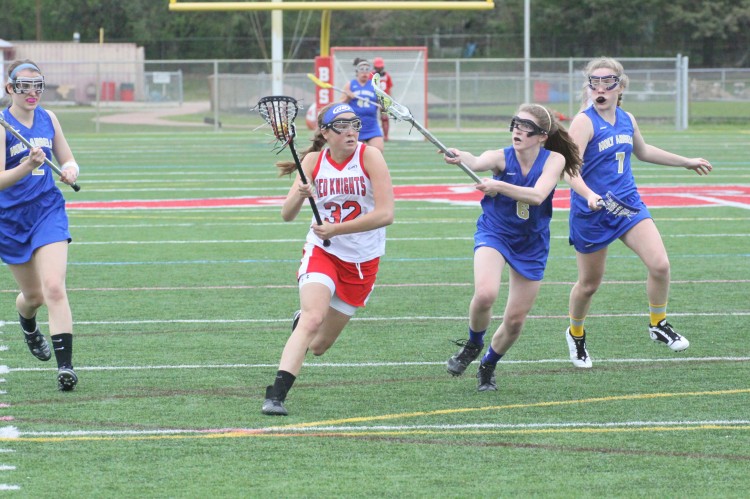 With a new coach, the girls' lacrosse team hopes to advance beyond section finals.

After being eliminated from the section playoffs two years in a row, the girls’ lacrosse team is bringing a new attitude and even a new coach onto the turf in hopes of getting back to the state tournament for the first time in six years.

Ms. Ana Bowlsby, the new coach in question, comes from the Eden Prairie Eagles where she served as an assistant coach for last year’s state runner-up. “She is very intense about the game and is going to push many of us harder than we ever have been pushed, but she knows what she is talking about. [She] is also very serious about lacrosse, which is very different than what we have had in the past,” senior captain Bailey Forcier said.

Despite the acquisition of a new coach, one problem still remains: chemistry. “I think our biggest challenge this year will be learning a new style of play and new techniques under our amazing new head coach,” senior captain Abby Grunewald.

With a new system and a new coach to become familiar with, the Red Knights have dedicated much more time to working in the offseason. “This year we’ve had a lot of offseason training to prepare everyone for the start of the season. We’re starting Saturday skills sessions in January. And as the season begins to draw nearer, we have more conditioning dates and practices at school and at the Long Lake Dome,” senior captain Sara Taffe said.

Another key component in getting the team on the right track before the season will be the leadership of not one, not two, but five team captains. “There are five captains this year, which is different from previous years, but we all seem to mesh really well and I think that’s really important in a team. We’ve already become close with a lot of the new girls, so it’s going to be a fun season,” senior captain Sammi Johnson said.

A quality season from underclassmen will be important, especially since the Red Knights lost five seniors to graduation. “I am most excited about all the potential we have,” Grunewald said.

Although this team has plenty of reason to be excited, there still remains a long road ahead to the playoffs. “I think our biggest challenge this year will be to come together as a team and play as a unit. I think in previous years we’ve relied on talent alone. We have the potential to be a very successful team if we can master our systems and play disciplined,” Taffe said.

There also remains the challenge of defeating the number of quality opponents the Red Knights will face during the season. “Our biggest competition will most likely be Edina. We have a lot of really good teams on our schedule this year including some long time rivalries [with teams] such as Holy Family and St. Louis Park,” Taffe said.

The Holy Family Fire appear to be number one on the team’s must-win list after losing a heartbreaking game 21-20 last year. “Although we could have beaten them the past two years, they managed to beat us by one point because they wanted it more. Definitely a heartbreaking game considering I know almost all of their players, but this season we can for sure beat them,” Forcier said.

The sky appears to be the limit for the Red Knights, who all feel that this season could be their best yet. “My plan for the year is to win as many games as possible, but definitely have fun because it’s my last season playing for the Red Knights. I want our team to have the best record in BSM history. I am most excited to see how far we will go this season. With the new coach, I think that we can go really far,” Forcier said.