“I don’t know what the nickname was, but he had a nickname from other Bantam teams in the state. Like ‘Cobra’ or something. When an eighth grader has a nickname statewide it says something....You could see it right away,” boys’ hockey head coach Mr. Ken Pauly said. 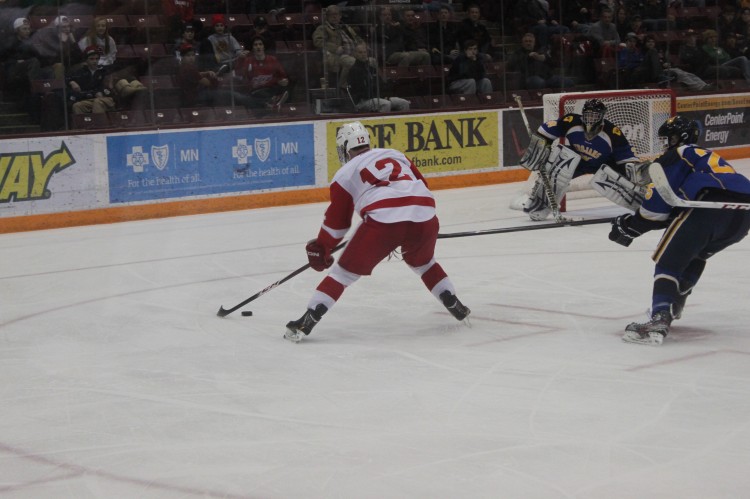 Senior forward Grant Besse, now 2013's Mr. Hockey, has been intimidating opposing goaltenders since he first stepped on the ice as a Red Knight freshman.

From his very first games as a freshman, Benilde-St. Margaret’s senior forward Grant Besse seemed destined for glory, scoring four goals and adding an assist in his first two games in a Red Knight sweater. He finished his rookie season with 27 goals and 19 assists, a BSM record for goals in a season by a freshman. “When he was a freshman in the first round of a section playoff game. He scored a hat trick against Alex Fonz, who was one of the best goalies in the state. For a freshman to do that, it’s pretty remarkable,” Pauly said.

Such a productive first season in the MSHSL helped to solidify Besse’s reputation as a dominant hockey force. “His calling card is still his skill. He’s a sniper; he’s a goal scorer. And he’s strong. People have a tough time knocking him off his feet,” Pauly said.

So it shouldn’t come as a surprise when former NHLer and inaugural Mr. Hockey winner Tom Chorske stepped to the podium and announced that Red Knight senior forward Grant Besse had won the 2013 Mr. Hockey award as the best player in Minnesota, beating nominees like Edina’s Parker Reno and Hill-Murray’s Zach LaValle.

Joining the ranks of past winners such as Johnny Pohl, Ryan McDonagh, and Paul Martin, Besse felt remarkable after receiving the award. “It’s an honor, you know I mentioned this at the banquet, you look at the list of all the past winners and see guys like Nick Leddy, Nick Bjugstad, Kyle Rau, and now for my name to be in the same category as theirs, it’s real humbling, and it’s a real honor,” Besse said.

Over his historic four year career, Besse has garnered jaw-dropping stats. He has a career total of 163 goals, 109 assists, averaging 2.41 points a game, and was an astounding plus 133; numbers impressive for many professional hockey players. He also claimed numerous records including most goals in a season by a BSM freshman, becoming BSM’s all time leader in goals, and, most notably, setting a state record by scoring five goals in a state championship game.

Of course, Besse never saw any of this success happening. “No [I never pictured it], going to back to freshman year you see guys like Nick Leddy and Nick Bjugstad win the award and you never think you’ll be comparable [to them] in any way, shape, or form. Even the state championship [I didn’t see happening]. Freshman and sophomore year we lost both years. As much I wanted to picture it, I knew how hard it was to get out of section 6AA,” Besse said.

“When you have a player get this sort of individual honor, it’s a great reflection on Grant,” Pauly said.

But in the 2011-2012 season, the Red Knights stormed through the section 6AA tournament and made it to the state playoffs. After narrowly escaping the Edina Hornets in the first round, the Red Knights crushed Lakeville South in the semi-finals.

Then Besse made history.

Besse stole the show in the championship game, setting a state record by scoring five goals in the game. And although that moment happened a year ago, the memory still remains. “Playing at the X in front of 18,000 people, with the guys, after everything we’ve been through that year…Then winning it and seeing Jack in the locker room afterwards. I don’t know too many experiences in my life that will be able to trump that feeling,” Besse said.

That kind of success characterized his entire high school career––a dominant scoring touch with an ability to contribute in the assist column. His value was immeasurable as a guy who was beneficial in all facets of the game, from powerplay to penalty kill to the four-on-four.

His work ethic, skill, and incredible hockey sense make Grant a once-in-a-lifetime player. “You don’t replace a player like that, you just don’t,” Pauly said.