Two seniors pursue their passion for skiing around the country 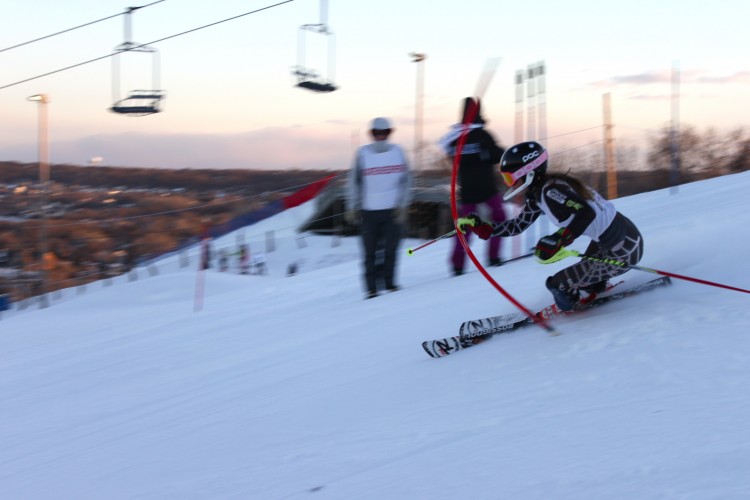 Skiing is not only a sport, but a lifestyle, that demands passion and persistence. BSM’s alpine ski team puts hard work and energy towards becoming exceptional, which a reputation they’ve lived up to this past season.

On February 13, four individuals from BSM participated in the state tournament, using skills gained from diligent practices. Both the boys’ and girls’ teams work and perseverance carried them through sections, earning them fifth place. But, for seniors Arthur Boyle and Mary Grace Arndt, and sophomores Jackson Fortney and Alex Setchell, the dedication paid off with a trip to Giants Ridge for the state race.

The high-school team practices at Hyland four times a week to prepare for their challenging races. “Races are fun but you need a lot of training to keep up because courses are a lot more difficult on weekends since you’re competing against leading skiers from other schools,” Boyle said.

Boyle and Arndt move even further past school participation into national skiing, a way of life, that demands even more time and dedication. This national participation is what exhibits and enhances their distinguishing skills.

Arndt grew up surrounded by skiing, her father and older brothers were very involved in it. “Skiing has always been a huge part of my family, I tried it out and I loved it,” Arndt said. She is looking into possible ski teams in college but may not continue racing. Boyle grew up under the influence of winter sports as well, but instead of skiing he was surrounded by hockey. Pricing and time commitment of hockey drove Boyle away, right into the arms of the ski slopes.

The furthest Arndt has traveled for a competition is Idaho during the Far West Championship, one of the divisions of USSA, last year. The farthest she has travelled for training is Switzerland. Over the course of her alpine career, she’s trained twice over the summer in Saas-Fee, exposing herself to an experience quite unlike the average U.S. skiing. “Ski racing in Europe is much more common of a sport. It was amazing because one day we would be training in between the German national team and the Swedish national team, and the next we’d be between the Austrians and Slovenes,” Arndt said.

Boyle’s favorite skiing trip is for training in the summers at Mount Hood, just outside of Portland, Oregon. He enjoys the amazing skiing and activities. “After skiing we’ll walk out to the backyard of where we stay and have a full field for dry land which is usually soccer or something similar. There are trees to set up the slack line, trails for hiking, lakes and rivers, and it’s close to Hood River and Government Camp which are both pretty cool little towns,” Boyle said.

Because of the competition, nerves tend to be a lot higher. “State competitions are a different kind of fun, because it’s usually all your friends you’ve known for a long time all getting together,” Boyle said.

Practice and repetition makes all the difference when it comes to skiing. “It’s all about muscle memory and training your body to know how to handle each course,” Arndt said. Time, dedication, sacrifice, and money are also keys to success in skiing. “It’s an expensive sport, and that can mean that opportunities are limited for a lot of people including myself at times,” Boyle said.

Skiing has a lot to do with mental attitude as well, especially when it comes to falling or making a mistake and trying to shake it off for the next race. “Ski racing is probably one of the most frustrating sports because you only have a minute or so to prove yourself and one small mistake can ruin you,” Arndt said.

Involvement in skiing can be very hard to balance with education and time with friends. “Most professional ski racers have never gone to college and they worked around their high school educations,” Boyle said.

Along with tougher courses, races can be distressing because the better skier doesn’t always win. “Different variables can cause different outcomes in a ski race, including the course, the weather, the hills, the temperature, and the visibility,” Boyle said. The ski team also participates in invites, which are daylong ski races with a pasta dinner the night before.