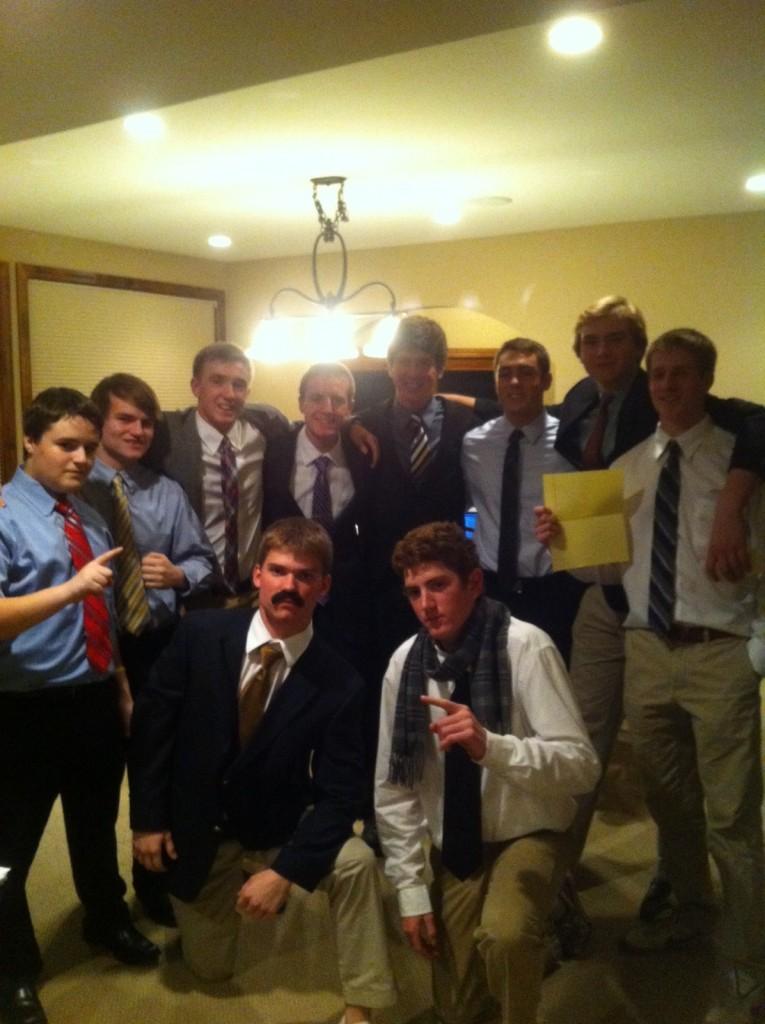 It all started when seniors Patrick Desmond and Rob Lance decided that Minnesota Hockey Hub was a bigger priority than working on their AP Government assignment.

“We were on Minnesota Hockey Hub and going through stats, and we were just like ‘woah, that’d be really funny if somebody made a fantasy high school hockey league,’ and then we were like, ‘oh, wow, we should actually do this!’” Desmond said. After the two recruited nine more friends to join, they formed the Minnesota Fantasy High School Hockey League.

Played much like fantasy football or baseball, owners draft a team consisting of nine players. They need five forwards, three defensemen, and one goalie. Teams are matched up weekly and whoever has the most points at the end of that week wins the contest. Players receive two points for each goal, one point for an assist, and one point for a game-winning goal.

Senior Adam Bamonti had the first overall pick in the draft, and selected BSM forward Grant Besse. His classmate––who is now second in the state in goals behind Henry Christman––was undoubtedly the top prospect.

“I picked Besse because, I mean, just look at the points he puts up. He had 50 goals last year, and he has 33 through this year. It just made sense,” Bamonti said.

The scouting report, conducted by senior and varsity hockey star Dan Labosky, also had Besse at the top of the rankings.

“Lobo made us a list of about 110 kids for us to draft from straight off the top of his head. We’ve got to give him props,” Desmond said. Besse even showed up for the occasion, posing with Bamonti for a picture, and acting as a draft consultant.

The draft was a formal occasion. where team owners opened laptops methodically and made their picks. Second overall was Sprenger, who made the mistake of drafting Chase Perry, a junior goalie from Andover.

“He did really well in the Elite League, but he’s pretty awful in the regular season.” Sprenger said, “He has like a .895 save percentage, so he’s going to be a free agent soon.”

In the league, owners are allowed to drop and pick up players from the free agency pool, which is any class 2A player. In fact, this is where Sprenger found Minneapolis forward Henry Christman, who has been the rock for his team in the weeks after he was selected from the free agent pool. “I’m not a big fan of [Christman] because he beat me single-handedly last week, but stuff like that happens. You’ve just got to find that diamond in the rough,” Bamonti said.

Hours are spent each week reviewing stats, updating rosters, and finding these “diamonds in the rough.” So it prompts a question: why would anyone actually spend this much time focused on a high school hockey?

“We probably care a bit too much about high school hockey, and don’t care enough about school,” Desmond said.

Desmond and Lance even created an official Twitter account about fantasy high-school hockey similar to the FakeHub, a Twitter handle that jokingly jabs at high school hockey players around the state.

Because this is their senior year, the whole league will retire at the end of this season, but they want it to continue in years to come. “We definitely want to keep this going. This isn’t a one time thing, and we want this to kind of go on for years in advance, maybe a Benilde tradition,” Sprenger said.