Washington worthy of Oscar nod in emotional and entertaining “Flight”

In the thought-provoking and emotionally complex film "Flight," Denzel Washington shows his worthiness for the Best Actor Oscar nomination. 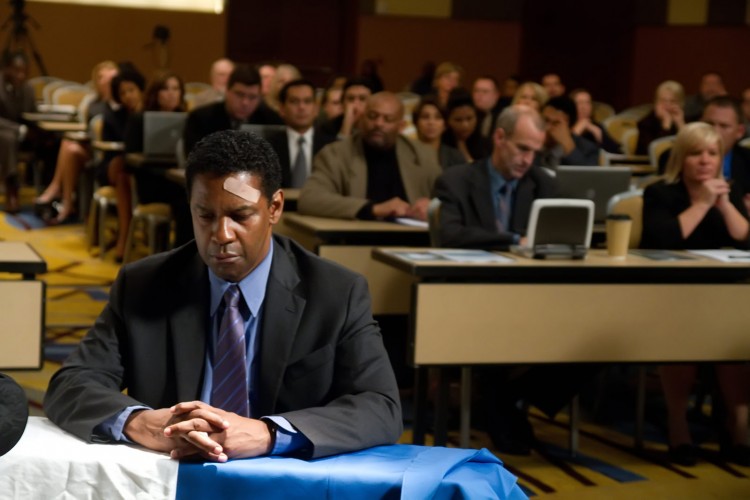 Denzel Washington portrays Whip Whitaker, a seemingly heroic pilot whose internal struggles with drugs and alcohol may cause his downfall.

With a talented front man and emotional scenes, Robert Zemeckis’s most recent film, “Flight,” is a must-see for those looking for a relatable film. This film covers difficult topics spanning from trauma to addiction.

This film appears well directed and produced, giving viewers a complete story in one-hundred and thirty-eight minutes. With crisp shots and artistically filmed scenes, the combination of talented actors and a director with a vision creates and emotional but entertaining film.

“Flight” tells the story of Whip Whitaker, a pilot who faces the challenge of safely landing a plane that begins to fall apart thousands of feet in the air. While considered a hero for saving almost all of the passengers’ lives, an ongoing investigation begins with the possibility that Whitaker had alcohol in his system at the time of the crash.

Playing the part of Whip Whitaker, Denzel Washington gives an outstanding performance with the difficult role of a man with many internal demons and addictions. His internal struggles allow viewers to get to know to his character; Washington evokes emotion in nearly every scene in his delivery, making him well deserving of his Oscar nomination for Best Actor.

Kelly Reilly, known for starring in “Sherlock Holmes” and “Pride and Prejudice,” plays the role of Nicole, a recovering drug addict who serves as a friend to Whip. Although very different from her previous roles, Reilly plays this part extraordinarily well and creates a likeable, strong character who propels the plot and brings out the human emotions in the character of Whip.

Well-known actor John Goodman plays an old friend of Whip’s named Harling Mays – a quirky, personable man who serves as Whip’s drug supplier. Harling Mays serves as an unusual character, and Goodman brings personality and spunk to Mays, though this character is not the typical “supportive and wholesome best friend” Goodman typically plays.

Other actors starring in this film include Tamara Tunie, most known for her television work, Nadine Velazquez, Don Cheadle, and Bruce Greenwood. Each in their own role, they bring different aspects and emotions to the story and investigation of Whip Whitaker.

Two particular scenes stood out among the entirety of the movie. The first scene that stood out was the plane crash. With rustling, panic, screams, and drops, this scene was filmed artistically and directly, showing emotion and fear perfectly. The movement of the camera wasn’t too sharp to watch, but still allowed viewers to feel the crash from the theater.

The second stand-out scene took place in a hospital stairwell. This was where Whip meets Nicole, and a cancer patient from the floor below. The screenplay in this scene proved to be phenomenal––extremely well written, allowing the actors in this scene to really embraced their characters and their characters’ emotions.

“Flight” has been rated R for good reason––themes in this film are for mature audiences, like drug use, substance abuse, and nudity. Despite these mature themes, this film is recommended for those fitting the criteria to see an R rated movie.

With leading actor Denzel Washington and a unique and impressive screenplay, “Flight” proved to be an entertaining and thought-provoking drama.