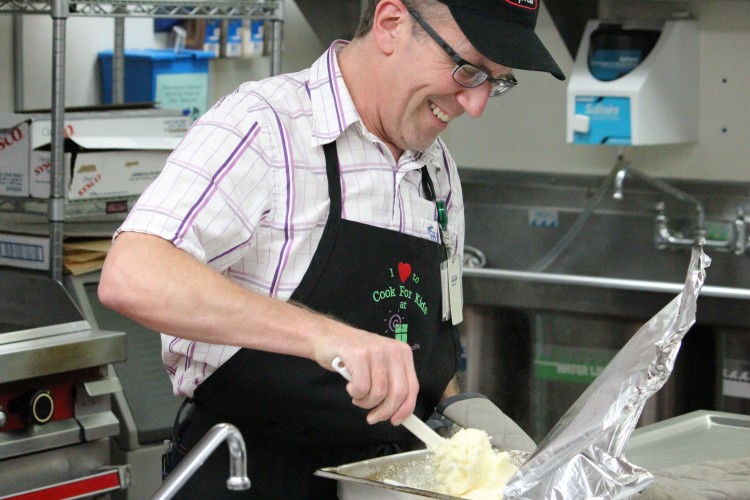 Among other services like overnight child-care and parent counseling, Crisis Nursery provides meals for families using the non-profit's services.

After two years of weekly volunteering at Crisis Nursery, senior Tara Fan is no stranger to intense situations. “I was working with a group of five kids… One girl just kept screaming and shoving things off the counter. I told her she had to put them back on the shelf, and I just couldn’t get her to cooperate. I found out later that she was deaf, 90 percent blind, and that she had autism. It completely opened my eyes. I spent the next couple of hours just working with her, getting her to play and understand, and you could tell she felt a lot more comfortable being there.”

Scenes like this occur daily less than five minutes away from Benilde-St. Margaret’s School at Crisis Nursery, a non-profit organization with a mission to end child abuse and to build strong, happy families. By offering free overnight child-care, parent counseling, and parent education classes, Crisis Nursery provides service to thousands of the neediest families in the Minneapolis area.

Since joining the non-profit in 2008, Joel Bergstrom, the Director of Development and Communications at Crisis Nursery, has found a passion for the organization. “I love it here. It certainly adheres to the teachings of the church. It’s impossible to argue with the fact that children and their families deserve to be safe,” Bergstrom said.

Crisis Nursery primarily serves families located in North Minneapolis. However, providing for people in this area can be a challenge. “We’re serving the people that people want to serve. The people we serve aren’t necessarily very good at asking for help. That’s just not something Minnesotans do very well,” Bergstrom said.

Volunteering at Crisis Nursery presented Fan with the opportunity to get to know people from a different side of the community. “It’s so different from the kids you see every day. It’s such an amazing experience to be able to see someone who’s so different from you, and be able to see what they’re going through. A lot of them come back all the time, so you end up seeing the same ones; you get to know them and how they operate, so you know how to deal with them,” Fan said.

Fan’s experiences spent with the children at Crisis Nursery have improved her ability to handle tough situations. “I have become more patient. There’s no way to know what’s going through a lot of their heads, so when the kids are screaming at you, you don’t really know how to deal with it. It’s not easy having the patience to tell them that’s not what we do here. It’s hard because you have to be kind of strict with them because they’re from families where being nice isn’t going to go very far,” Fan said.

Through his years working at Crisis Nursery, Bergstrom has come to appreciate the courage and love that parents of Crisis Nursery show for their kids when they use the services. Being a father himself, Bergstrom can relate to wanting the best for a child. “I’ve learned about what it means to be a parent. It’s already been validated that these parents know what’s best for their children. They’ve already called us, which is a huge step. It’s very honorable,” Bergstrom said.

Bergstrom has also learned of the power of his community through his work at Crisis Nursery. “Some people volunteer their money. Some volunteer their time, while others do both. People like to give their time, we are very fortunate. This organization wouldn’t be what it is without the help that we get from the community and our volunteers. What we are able to accomplish in just one day here [at Crisis Nursery] is astounding. My work has a loud me to see the ability this community has to make a difference.”