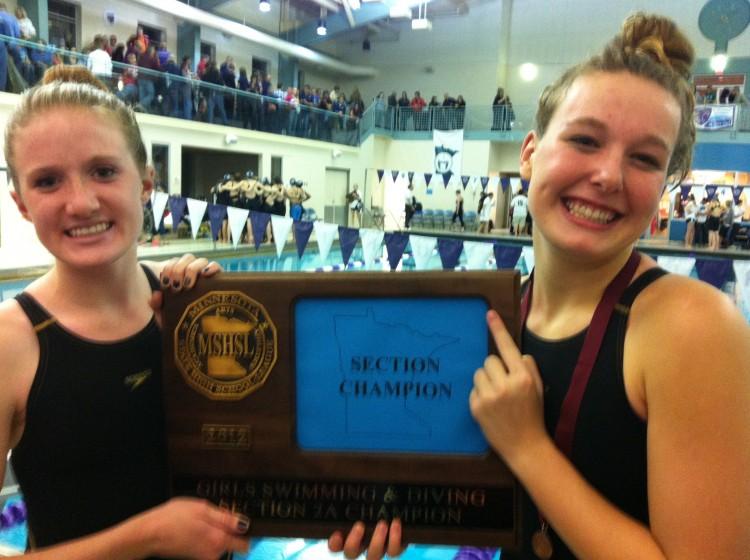 The girls' swim and dive team took home the section championship trophy and is sending eight swimmers and one diver to the State meet.

The Benilde-St. Margaret’s girls’ swimming and diving team has consistently, yet quietly, been one of the top sports in BSM’s recent history, and the 2012 season proved no different. After a strong regular season, the program dominated the section swim meet, sending eight different swimmers and one diver to the State tournament and taking first place at sections for the first time in the program’s history.

The swimmers and divers were consistently top finishers in the twelve section events, taking first place in five separate events, including the 200 and 400 yard freestyle relays, the 50 yard freestyle and the 100 yard freestyle. Once all scores were tallied, the girls had taken first place with a score of 428 points, edging out Blake by 27.5 points, a very small margin in high school swimming. “I had in the back of my mind the possibility that we might win the meet. When we did, though, it felt surreal. Everything fell into place, and I couldn’t be happier,” senior swimmer Catherine Cole said.

“Winning sections has been our goal this entire season. We have always had great swimmers, but we finally had the depth this year to pull off the win. It’s been so much fun,” senior swimmer and captain Amanda Semler said.

Although the team took first place, they didn’t qualify for state as a whole. However, eight swimmers did qualify for the State meet individually in ten different events.

Semler, senior Emily Egge and eighth grader Madison Semler, finished second, third, and fourth, respectively, in the 200 yard free to make it to State. “Finishing my sixth year on the team at the State meet is the best ending I can think of,” Semler said.

Senior diver Rachel Thorstenson took first in the section’s diving portion, making it to State, while Cole made it to state after taking first in the 50 yard free. Juniors Megan Pohle and Claire Torgenson, as well as seniors Madison Winston and Cole, made it to state as parts of various relay teams that clinched spots in championship heats.

Although not all girls qualified for State, the rest of the team will still be on hand to support their teammates. “There aren’t divisions on the team or a separation between junior high girls and senior high girls or anything. Swimming is so often perceived as an individual sport, but our strongest elements are our unity, support, and teamwork,” Cole said.

The girls’ swimming team has always been a strong sport at BSM. Despite their success, the team rarely makes its way into the spotlight. “It’s disorienting to have the entire school get out for soccer State or hockey, while less than a tenth of the student body even knows we have a swim team,” Cole said.

For now, the girls will rest and prepare for the upcoming meet. With a strong contingency of some of the school’s best swimmers on their way to the State meet, the girls’ swimming and diving team has the chance to not only excel one last time, but to bring their sport into the school’s spotlight.