Athlete of the Week: Dana Buckhorn 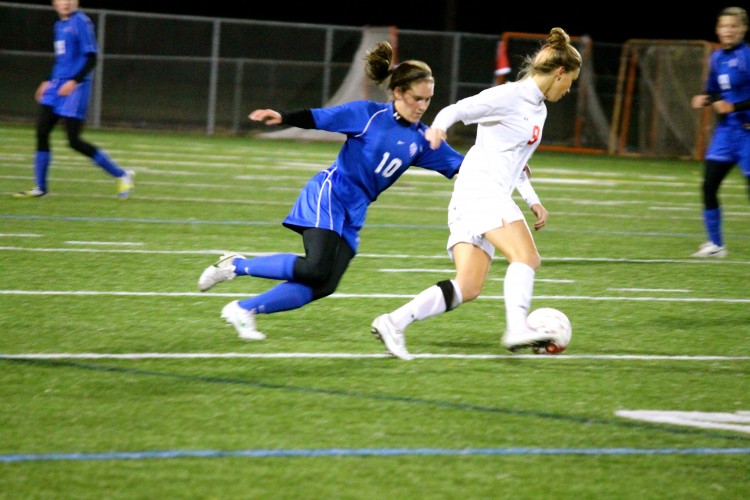 Senior Dana Buckhorn gets ready for the upcoming girls' soccer State tournament while recounting her wide range of accomplishments this season.

During her fourth year on the girls’ varsity soccer team, senior captain Dana Buckhorn had her most successful season yet. Her list of accomplishments include being placed on All State team, being named to the All Metro First Team by the Star Tribune and reaching 100 combined points in assists and goals––one of only three people to ever achieve this feat. Buckhorn also lead the North Suburban Conference in goals this year with 21 goals and 19 assists. However, the season is not over for the girls’ soccer team as they will be playing in the State quarterfinals on Friday, Oct. 26 at 5:30 p.m.

Knight Errant: After four years on varsity, how does it feel to be a leader on the team?

Dana Buckhorn: I love being a leader on the team because I remember what it was like to be a freshman, and how much I looked up to the seniors. Also I was born to make warm up CDs, which comes along with being a captain on the team.

KE: And what were your personal goals for your senior year?

DB: My main goal this season is to win State, hands down. So all of my personal goals went along with trying to win state this year. I really wanted to be able to pull through in tough games and score or assist when it mattered. From a personal standpoint, I tell myself before every game to go make an impact on the field, so whatever that means, that is what I try to do.

KE: To top off your personal goals, how did it feel to be nominated for Ms. Soccer?

DB: It was really exciting to be nominated for Ms. Soccer because I grew up admiring players like Maddie Jobe, who got it my freshman year. It’s something I always wanted, but it always kind of seemed out of reach, so that made it really exciting.

KE: With all of your accomplishments this season, did you break any records/Benilde records?

DB: I got my 100th point in the middle of this season, so I am one of three people in the history of Benilde-St. Margaret’s to break that record. I’m second in points now behind a girl with, like, 200 from the 80s. I was also fourth in points in the state in both divisions.

KE: On top of all of the success you and the team has already had this season, what would winning state mean to you?

DB: Winning state would be the best possible way to end my four years on the team. We have been so close so many times, and every day I go to practice with the thought in my mind of actually winning State.

KE: How do you feel about your chances at winning State?

DB: I honestly think that this is the best team we have had in the last four years. I am really nervous for State because we have been first in State for four years now, and we have never won. I think we have a good chance, I am confident, but not cocky, going into State.

KE: With your past experiences in the State tournament, what are you focusing on most?

DB: We are really focusing on not being over confident. We have been ranked number one in the state for the past four years, but we have never won. We are also undefeated so far, so it is really easy to take games lightly, but we will not be doing that at State.

KE: What are your soccer plans for after your final high school season is over?

DB: After the Benilde season is over, I will probably not leave my house for a couple of weeks, but then I will play the rest of the year on my Minnesota Thunder Academy team. I have a lot of fitness I have to do to get ready for playing soccer next year at the University Of Vermont.