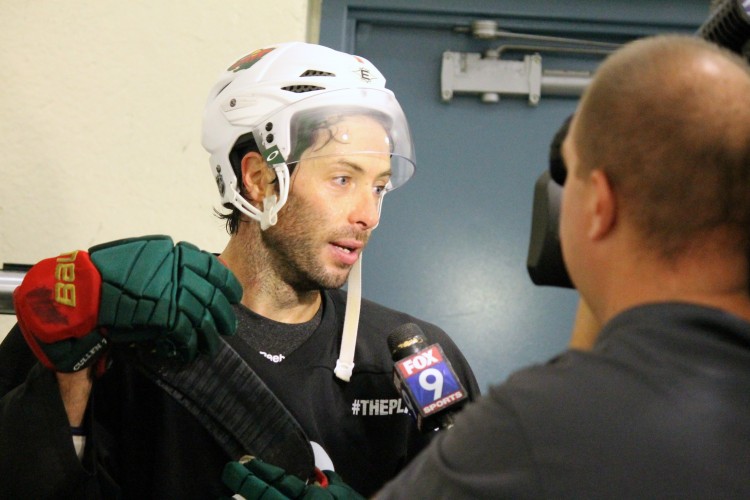 Assistant Captain for the Minnesota Wild, Matt Cullen, is just one of the NHL players that has been practicing in the SLP Rec Center at the "Octagon" camp.

About 40 NHL players grace the ice at the St. Louis Park Recreation Center four times a week this fall participating in a pro hockey camp. Led by an agency called “Octagon,” this camp attracts players from all around the NHL in different cities around the league.

The Minnesota-based camp, held at the Rec Center, is one of nine “Octagon” clinics taking place during the off-season, with locations spanning from Sweden to Los Angeles. Winnipeg Jet and Stanley Cup champion Dustin Byfuglien is one of the many athletes involved in the organization that also covers many other sports including swimming, baseball, and tennis. “‘Octagon’ is just a big agency that covers all sports…there are four or five different offices that are considered ‘Octagon.’ I think [Los Angeles] has one, Montreal has one, and they’re just all over,” Byfuglien said.

Many other NHL players participate in this off-season camp including Wild stars Zach Parise, Pierre Marc-Bouchard, and Niklas Backstrom, and Minnesota natives Blake Wheeler, and Kyle Okposo. And though this is an annual clinic, the attendance has risen a little due to the current NHL lockout. “[Because of the lockout] there’s a few more different guys that come here to Minnesota to join the camp,” Byfuglien said.

Even with the ongoing negotiations, these locked-out NHL players are taking every opportunity to get out on the ice. “We’re just here staying busy, doing our thing,” Byfuglien said.