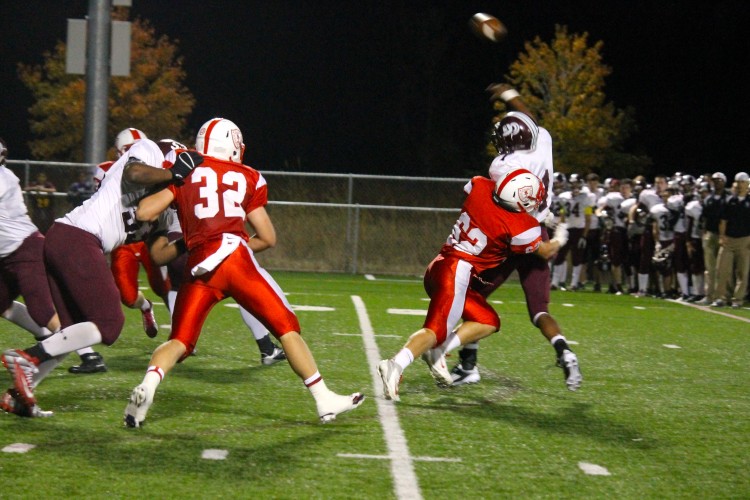 The Irondale Knights spoiled Benilde-St. Margaret’s homecoming football game in a 20-14 win on Friday, September 28. Irondale’s defense and big plays were key in their victory over the Red Knights.

Irondale started the scoring with a thrilling 66 yard run from senior quarterback Justus Canfield. The Red Knights offense countered with senior running back Garrett Haughey running in from 11 yards out to even the score at 7-7.

Junior quarterback Keaton Studsrud gave the Red Knights the lead in the second quarter on a 22 yard pass to junior wide receiver Nathan Hanks. The defense did their part in blocking an Irondale field goal and the Red Knights took a 14-7 lead going into halftime.

Irondale scored first in the second half on Canfield’s second touchdown run of the game tying the game at 14-14 going into the fourth quarter. Canfield finished the with 112 rushing yards and two touchdowns for Irondale.

The Red Knights had a fourth down in their own territory and Studsrud under threw a screen pass to junior tight end Jack Sims. The Knights were able to run the clock down and took a 20-14 road victory.

Keaton Studsrud finished with 246 yards passing and a touchdown while junior wide receiver Sam Lynch caught 11 passes for 122 yards, posing a big threat throughout the entire game for the offense. On defense, seniors Mikey Koller (with a fumble recovery), and Barrett Fitzgerald (with nine tackles) were the standout players.

The loss drops the Red Knights to two wins and three losses on the season. The next game will be Senior Night against the Chisago Lakes Wildcats on October 5 at Benilde-St. Margaret’s.