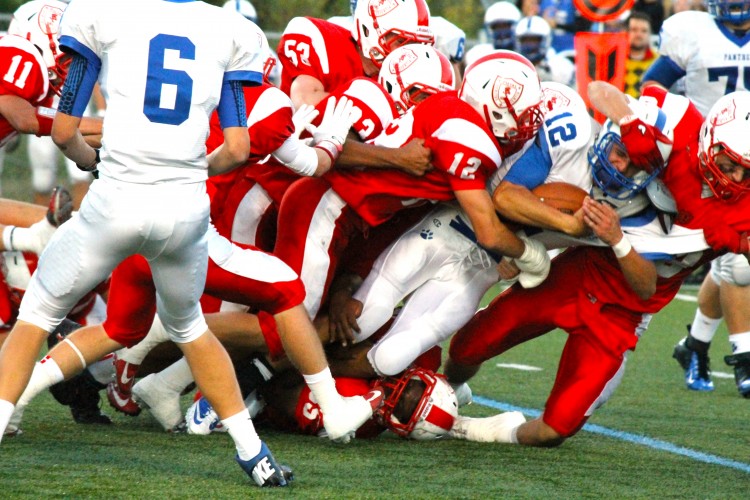 In the second game of season the Spring Lake Park Panthers defeated the Red Knights 16-0.

After defeating the Robbinsdale Cooper Hawks in their season opener, the Red Knight football team was shutout by the Spring Lake Park Panthers 16-0 on their September 7 clash at the Benilde-St. Margaret’s turf field. The Panthers’ defense held the Red Knights under 200 yards of total offense and to only 26 rushing yards.

Spring Lake Park scored on their first drive with a one yard touchdown run from junior running back Eji Ejiya. Neither team scored the rest of the half leaving the Panthers with 7-0 lead going into halftime.

Spring Lake Park added to their lead in the second half with a touchdown run from senior quarterback Connor Janu who finished the game with 60 yards rushing on 13 carries. In the fourth quarter, senior kicker Matt Fruzyna added a 27-yard field goal making the score 16-0.

The Panthers’ defense dominated the Red Knights up front; in particular senior defensive lineman Jacob Ojile whose four and a half sacks created problems for the Red Knights. Senior linebackers Barrett Fitzgerald, and captain Spencer Shaver had double-digit tackles for BSM. “Some guys have jobs, mine’s getting in there and making tackles,” Shaver said.

The Red Knights only managed 26 yards on 30 against the Panther defense. “They’re very aggressive and very well coached, they understand how to play their position,” BSM co-head coach Jon Hanks said.

The Red Knights did have success in the air with junior quarterback Keaton Studsrud throwing for 168 yards. “We saw what [the Panthers] were doing all night and Keaton gave us some good balls,” said junior wide receiver Nathan Hanks, who led the Red Knights with five catches for 60 yards.

The Red Knights fall to 1-1 on the season and will play the Fridley Tigers (1-1) on Friday, September 14 at Fridley. “[We] just go hard, try to run our plays as perfectly as possible and get our minds ready to get another [win],” senior running back Garrett Haughey said.