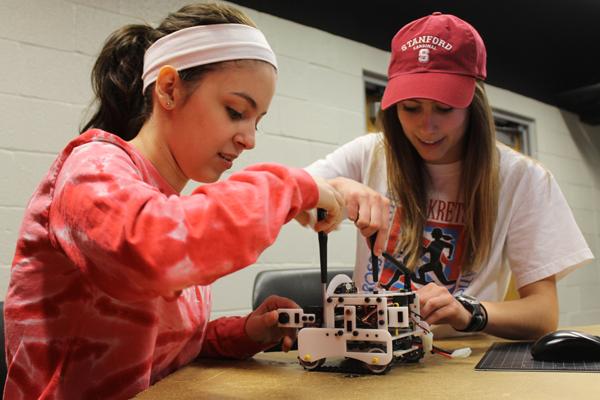 Winning the World Championships Technical Presentation at Robo Cup Junior in 2010, BSM’s Advanced Competitive Science (ACS) program is considered one of the best programs in the country. Although male dominated, a few girls who have excelled greatly as well. BSM’s ACS program leads as an example for other high school engineering programs.

Engineering, one of the fastest growing fields with the highest paying jobs, demands more women engineers in today’s workforce. “It makes taking ACS seem really practical. It’s cool to think that what I am doing will possibly help me find a job, and I am only in high school,” said junior ACS student Shannon Kraemer.

Females only make up around 12% of all engineers according to Forbes Online, which explains the greater number of males over females in the ACS program. “A stereotypical ACS student is a person who can only think concretely and is really good at math,” said Kraemer. “There are definitely more guys in ACS, but the girls who are in it try really hard and usually succeed.”

Studying engineering opens up a lot of doors for a variety of potential career paths. Senior Emily Herrmann knew she wanted to go into the pharmaceutical field since her freshman year and considered engineering as a useful, complementary class that could help her further along in life. “Mrs. Schroeder, my freshman science teacher, convinced me to take the class, and worse case scenario I would get good problem solving skills. I tried it and hated it sophomore year, and then it grew on me junior and senior year,” said Herrmann.

Some students who have not participated in any programs like the ACS program do not sign up because they do not know what to expect from the class. “Everyone tells you it’s just a class where you play with Legos, but in the class, you actually learn different engineering concepts,” said junior Nolan Ahlm.

BSM students often find success through the ACS program, manifest through their travels to Istanbul, Osaka, and Singapore to compete in the Robo Cup Senior Rescue Robot Competition. Four to six outstanding seniors will travel to Mexico City, Mexico in June before heading off to college where many of them plan to study engineering.