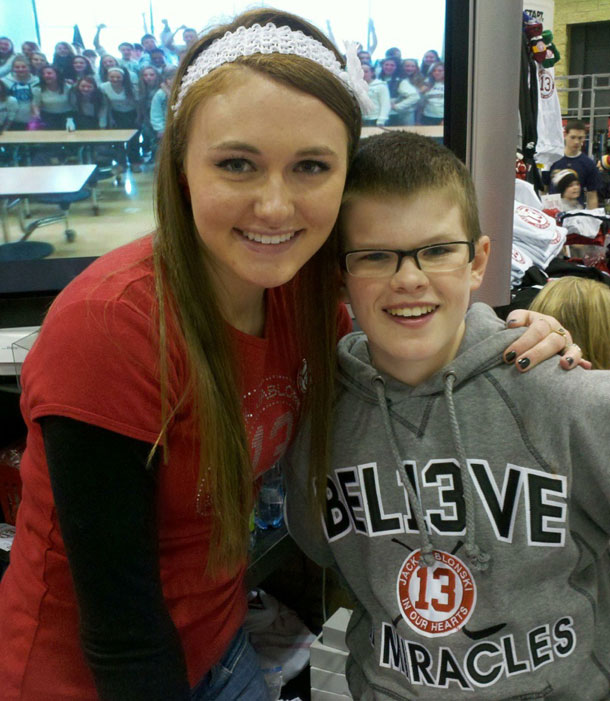 Before fans began to gather in the Xcel Energy Center on Saturday, March 10 to see the BSM boys’ hockey team win the state championship game, many frequented the 23rd annual Let’s Play Hockey Expo at the St. Paul River Centre. This year, a booth was set up at the expo in honor of Jack Jablonski, BSM sophomore forward who suffered a paralyzing injury on Dec. 30.

The booth aimed to sell the variety of “Jabby” merchandise that has been produced in the last two months in order to raise money for the Jack Jablonski fund. “I helped to sell all of the Jablonski merchandise: bracelets, stickers, pins, and all the other stuff. The first person that came up handed me a $103. We raised a lot of money,” said junior Megan Johnson, who volunteered at the booth.

Hosting the booth at the expo would not have been possible without the tremendous amount of support that the hockey community and entire state of Minnesota has shown for Jablonski. “It was basically an opportunity where everything was donated to us: the space at the expo, the tables and chairs, and the banner. We have received a huge amount of support from all around the state. Most of the teams that were there were supporting the Jablonskis in some way,” said Shelly Hoesley, one of the booth’s coordinators.

Like most of the recent fundraisers held recently for the Jablonski family, the booth was a great success. “I would guess we probably sold $19,000 worth of stuff. And not all of that is profit, because we have to pay for the things that we used to set up the booth, but that number also doesn’t include credit card purchases,” said Mrs. Hoesley.