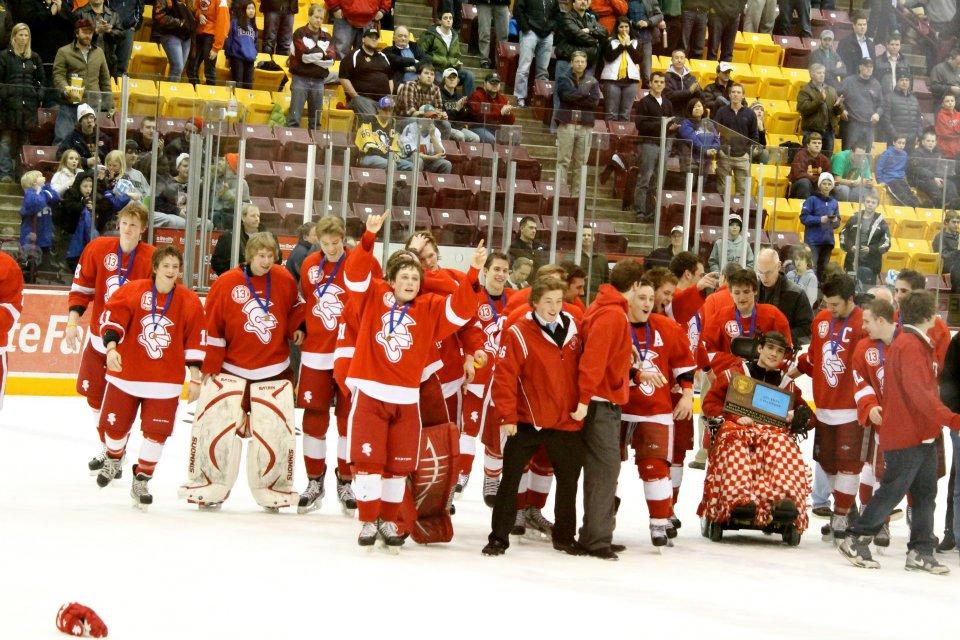 Led by senior forward Jake O’Borsky’s two goals, the boys’ hockey team beat Minnetonka 5-1 on Wednesday, Feb. 29, at Mariucci Arena, advancing them to their first trip to the state tournament since 2008.

The Red Knights started the scoring quickly, with surprisingly clutch sophomore forward Zach Hale scoring from the right side. Hale only scored in one game during the regular season, but has goals in back-to-back games in the section tournament.

O’Borsky scored his first goal in Bobby Orr-fashion, flying through the air after beating Skipper junior goaltender Paul Ciaccio. Senior forward Christian Horn assisted on the goal, giving him 200 points in a Red Knight sweater, the first person to do so. Senior forward Sam Rothstein scored for Minnetonka just minutes later, but the Red Knights still went into the first intermission with a one goal lead.

In the second, O’Borsky had the only tally of the period, with the goal coming with just under two minutes left in the period on the only power play of the first two periods.

After needing to be helped off the ice in the second period for what appeared to be a right leg injury, senior forward Tyler Ellegard scored on a shot that trickled through Ciaccio’s pads. 20 seconds later, Horn wrapped up the scoring with a breakaway goal to give the Red Knights a four goal lead.

After the game, Jack Jablonski, who was severely injured in a hockey game on Dec. 30, went onto the ice in his motorized wheel chair for the post-game handshake and the trophy presentation. He accepted the trophy for the Red Knights and was given a standing ovation.