Confessions of a teenage cat lady 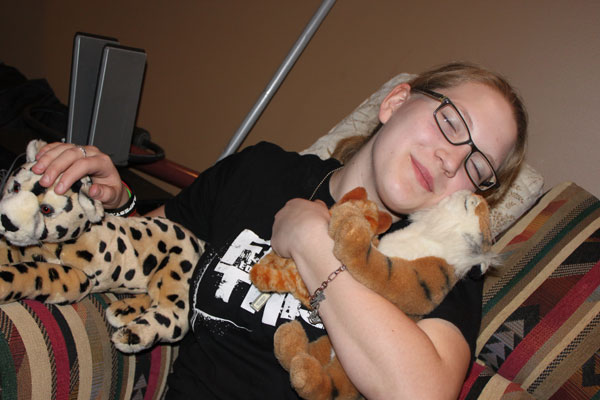 I walked into my house late on a Monday night after a long day of work for the junior high musical. My parents had already gone to bed and my siblings were perfectly happy to keep watching whatever MTV2 was offering for the night.

Then I felt it: a light bump against my leg. Warm, fuzzy, and welcoming. I looked down into the lovely green eyes of my dearest beast, Rascal Maximillian. I scooped him up and gave him his nightly kiss on the head. I felt his loud purr as he kneaded his paws into my arms. Even if everyone else is indifferent to my presence, I know I make Rascal’s day, and it makes me feel loved.

Rascal is spoiled, mostly by me. Granted, there’s not real competition for that position: my sisters don’t particularly like him, my mom likes him when he’s not being irritating (which is often), and my step-dad actually wants to kill him and start a restaurant called Buffalo Cat Paws. My step-dad’s murderous musings aside, Rascal’s spoiled state means he rarely walks anywhere when I’m home, which may or may not have something to do with his extreme girth.

The ceiling in my old house didn’t extend all the way to the windows, so Rascal used to climb up through the gap into the vents to go spider hunting. All he got on the average day was a web up the nose which I had to help pull out later. One day, I walked into the basement to take a shower only to find a pile of tile scattered all over our table and Rascal laying in the dust. He often took advantage of the space between the ceiling and windows to enter our vents. That day, Rascal’s weight caused one of the vents to fall out of the ceiling, breaking the ceiling tile and depositing him and what was left of the tile on the table. Frankly it’s amazing my family kept him long enough for him to smash the ceiling considering what he’d done a year before.

Once, we went out of town for two days and came home to a flooded basement. To our chagrin. Rascal had pushed newspaper into the kitchen sink and turned it on sending water flowing into the basement for three days until my mom stepped into the house and slid down the waterslide that had become the stairs to find a few inches of standing water and Rascal sitting calmly on top of a table which had become an island. Surprisingly, we still kept him, and because I didn’t have to clean up the mess, I still loved the cat.

It’s a challenge to overcome the stigma of being a “cat lady”. I’m obviously not some seventy-year-old woman who lives alone in a house with fifty-two-and-three-quarters cats. I’m a mostly-normal eighteen-year-old, and I have one cat (though sometimes I wonder if he’s not a raccoon) that I just happen to love and who I really think loves me too.