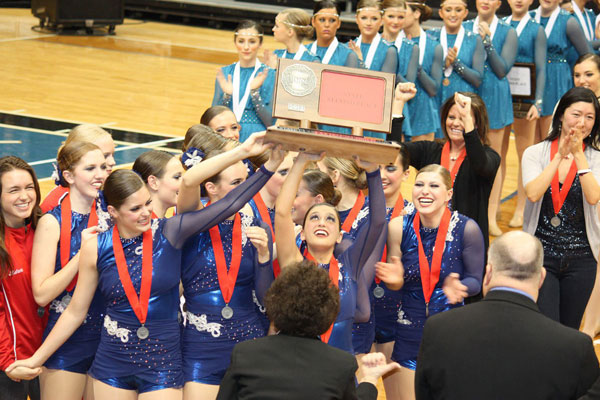 Although facing difficult competitors going into the AA State tournament, the Knightettes Dance Team placed second in Jazz on Saturday, February 18 at the Minneapolis Target Center. The Chaska Hawks Dance Team, a team recently moved down to the AA division, took home the championship.

Last year, the Knightettes won State in the Jazz competition and placed seventh in High Kick. “Our goal for Jazz was to peak at the right time, which would be finals at state,” said junior, Shannon Kraemer. The Knightettes pulled out their best performance of their Jazz dance in finals.

In the State tournament, 12 teams (the top three from each of the four sections) dance in a preliminary competition. The top six teams are then announced as finalists and perform for a second time later that night when they are judged without influence from their preliminary performance.“We had such a good prelims that finals was icing on the cake. After the final performance, we all felt really good about it that our place didn’t matter to us,” said senior captain Alex Bonvino.

The Knightettes competed against the Chaska and Fairbault dance teams at sections and state; both of the teams used to dance at the AAA class level. “The competition was really hard. We are quite arguably in the hardest AA section, because two AAA class teams moved down to AA and were put in our section,” said Kraemer.

The Knightettes danced to a rendition of the song Bleeding Love, originally sung by Leona Lewis. Jazz dances have more emphasis on technique, with a close draw from ballet and classical dance. High Kick dances focus on the kicks and the team dancing in unity. “Jazz is more artistic, its a lot more technical skills than kick has. Kick is basically creating visual pictures on the floor and everybody dancing together as one unit,” said Bonvino

Although the Knightettes did not move onto the state competition in High Kick after placing fourth in their section, the girls were happy with their final performance. “We did so well, no one had regrets afterwards, and we didn’t feel disappointed with ourselves because we did the best we could,” said Kraemer.