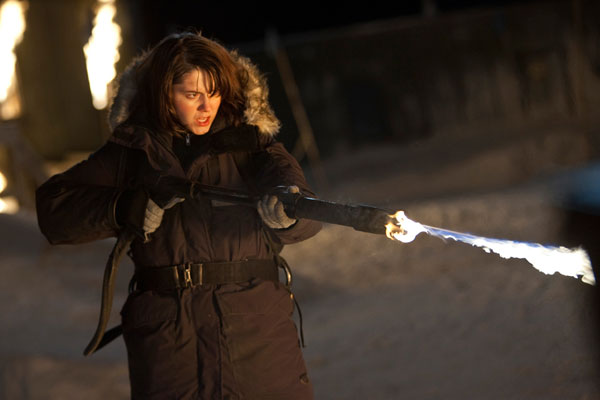 Considered by most to be a remake of the original, “The Thing” actually serves as a prequel to the story created by John Carpenter in 1982. While John Carpenter’s “The Thing” is rated on the Internet Movie DataBase as the fifth best horror movie of all time, the 2011 remake fails to achieve the original film’s quality. Crazy visual effects, lack of a dramatic soundtrack, and a badly reworked (and predictable) plot all give the feeling that the director tried way too hard to create the ultimate horror flick.

On a first viewing, the plot appears original, but plot twists are too predictable to be enjoyable. A Norwegian exploration crew discovers an alien in a block of ice, which (surprise) jumps out and starts killing the scientists. After discovering the alien’s weakness—fire—the crew spends the rest of the time tracking it down and killing it. A unique genetic trait makes the alien very difficult to find, and results in the crew losing all trust in each other.

The basic plot sounds familiar, since it’s common through every alien movie ever created, but there are a few differences that set this one apart from the rest. Most creature features rely on suspense to scare the viewer, but the alien in “The Thing” is visible quite often from beginning to end. The alien’s goal isn’t to kill and eat all of the scientists, as most aliens end up doing, but to escape to society to destroy the entire world.

The special effects, while more realistic than those of the original movie, detract from the movie as a whole. Scientists with gaping mouths in their torsos, enormous spaceships, and explosions, while visually impressive, are largely irrelevant to the plot and create a nearly comedic effect.

“The Thing” is worth watching for those who are just looking for some quick entertainment. The movie buff, however, will prefer to watch the original for the true horror experience.