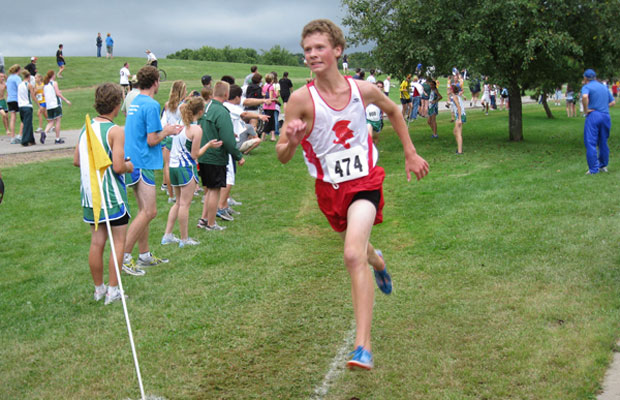 Runners on the cross country team have consistently been running around 17 minute 5Ks, making this year’s team the most successful they’ve been since 2005, when the team made it to state. The top 7 runners on the team have the drive and determination to win and hopes that they can continue to get better.

The team placed in the top four at meets four times this year, finishing second out of 13 teams at the St. Francis Invitational. That kind of success has head coach Mr. Mark Snell confident in the abilities of both his veteran and rookie athletes. “We’ve got a good senior group and a mix of young talent and probably one of the hardest working groups since 2006,” said Mr. Snell.

Coaches Mr. Justin Smith and Mr. Snell have helped the athletes gain respect for the sport, and that has boosted the team’s production on the course. “Justin’s a funny guy, and Snell is a really good motivator. You can look up to them as a person and a coach,” said sophomore Jay Biwer.

The team this year is hard-working, but they are also extremely talented, as the team’s top seven runners have all finished within roughly 40 seconds of each other. “On flat courses we’re fast, we have speed, and a lot of endurance. We run in good packs together,” said sophomore Andrew Renier.

Practices started over the summer, when members of the team were assigned a specific number of miles, ranging from 100 to 500 miles depending on the grade, to run over three months. The athletes and coaches also gathered each week at French Park to work on important fundamentals of running. “Great runners are made over the summer,” said senior captain Ryan Stowe.

Stowe, who can run the 2-mile in 11:00 minutes, has established himself as both a great runner and a strong leader who does what he can to make sure the team is the best it can be.

Although the stress of the long season may get to runners, it rarely affects their ability to perform. They help one another be their best, and don’t let each other give up on the season. “The atmosphere on the team is just so happy and positive that it makes up for our negatives and makes the team stronger,” said Stowe.