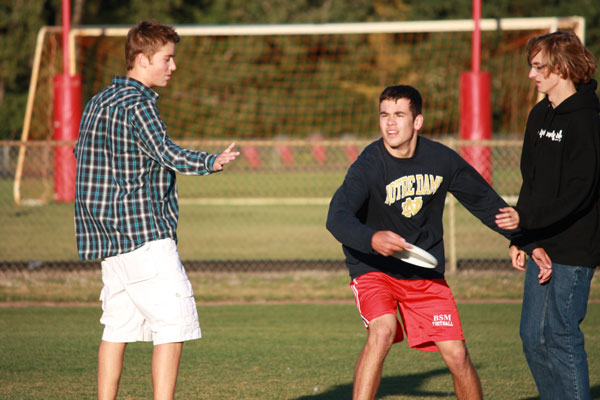 A sport previously dominated by college students throughout the country has now made its way into the Minnesota High School scene. Come next spring, Benilde-St. Margaret’s will have, for the first time, its own Ultimate Frisbee team.

What is soon to become the Ultimate Frisbee team began forming last spring with a group of senior friends. “We would just play after school and whenever we had free time. Over the summer, we also got the chance to scrimmage the already formed Minnetonka team who won state last year. We only lost 11-15.” said Will Satre, co-founder of the team.

Over the spring and summer, seniors Will Satre, Sam Conley, Dan Krestch, and their friends decided it would be fun to form an official team. “About a week before school started, we came in and talked to Mr. Pettinger about starting a team,” said Satre..

With permission to start the new team, co-founders Satre, Kretsch, and Conley have set out to find a coach to help them develop their strategy and skills, which Conley said lacked greatly in their game against Minnetonka High School. “We just didn’t have a proper understanding of the skills or rules to be a completely formidable opponent,” said Conley. “Our only strategy was to throw it really far and try to jump higher than [the Minnetonka players] to catch it,” said Satre.

The search for a coach has come up with many leads, including some old college friends of Mr. Adam Groebner, but nothing has been finalized yet. “When we do get a coach, though, he will have a lot to work with. There is a lot of potential in the team. Conley and I can jump really high to catch [the Frisbee], and we have some [cross country] kids who have really good endurance,” said Satre.

The Ultimate Frisbee team will have its competitive debut next spring when they begin playing in the Minnesota High School Ultimate League (MHSUL). Because Ultimate Frisbee is not recognized as an official sport by the Minnesota State High School League (MSHSL), the MHSUL was formed to accommodate this new sport. “Unfortunately, we won’t be competing this fall because too many kids play other sports, but we do have field time on the turf, Wednesdays at 6 p.m., starting this fall,” said Satre.