The Pirates “Arrr” Back! 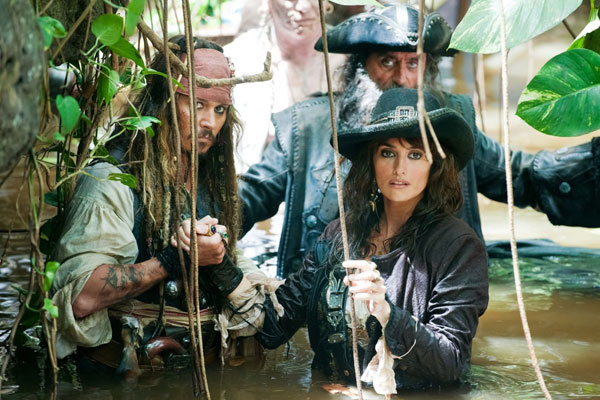 Following three remarkable films, “Pirates of the Caribbean On Stranger Tides” makes a jump forward from the previous movies. The journey to the fountain of youth is an exciting roller coaster filled with hate, blood and love.

The movie itself is the best of the series. The screenplay, script, 3D visuals, and plot all exceed expectations. The set locations are breathtaking and include a vast range of terrain, from lush forests to amazing waterfalls to spectacular coves.

This latest installment to the Pirates saga introduces many new characters including Angelica, played by Penelope Cruz, and Blackbeard, one of the most feared pirates back in the day, played by Ian McShane. Geoferrey Rush actes as Captain Hector Barbossa, one of the few characters who appeares in the earlier Pirates movies. With the amazing supporting cast, Captain Jack Sparrow, played by Johnny Depp, steps back as the main character and allows more personality to come from other actors.

The film’s outstanding creativity keeps the crowd guessing throughout the whole movie. With Captain Jack Sparrow, anything is possible. Director Rob Marshall uses this to hishis advantage and keeps the audience in suspense as Sparrow jumps from tree top to tree top, dressed up as an important politician, and does what he does best: just acts as himself.

Marshall was given the important task of capturing the new Pirates film in the most audience-appealing way possible. A Tony Award winner for outstanding choreography in both “Annie” and “Chicago”, Marshall also received nominations for the Satellite Award for best director. Under new direction, “Pirates of the Caribbean on Stranger Tides” was able to flourish and not only match but surpass the excellence of its predecessors.

The way the director uses mythical creatures and other nautical stereotypes is fantastic throughout the film. Mythical creatures that are usually known to be the nicest and loving animals can turn out to steal a soul. The genius creativity of the plot and cinematic structure brought a whole new element to the movie. It took the series to a new level, and with all the new additions, this fourth movie in the memorable Pirates collection is not one to miss.