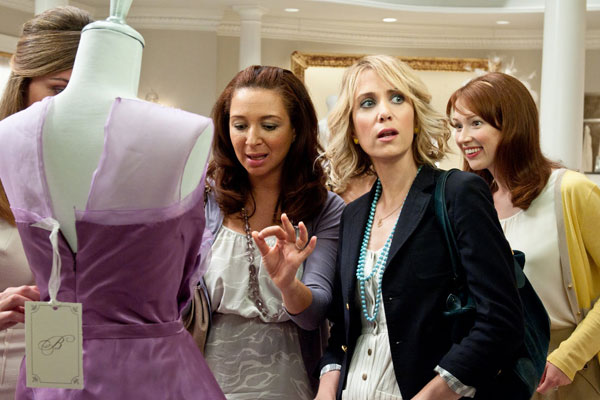 Something old, something new, something borrowed, something blue. “Bridesmaids,” the newest comedy from director Judd Apatow (of “The 40 year Old Virgin” and “Knocked Up”), puts a hilarious spin on the timeless wedding story. Produced by Paul Feig (“Freaks and Geeks”), ”Bridesmaids” proves triumphant with its endless innuendos and incredibly raunchy humor.

“Bridesmaids” is “The Hangover” and “Sex and The City” combined in one non-stop comedy. It is not a classic love story, but rather, the story behind what makes a wedding complete.

The plot is centered around a 30-year-old named Annie ––played by the hilarious Kristin Wig–– who has to undertake the difficult task of planning her best friend’s wedding, despite the fact that her life is falling apart itself. From wonderful nights on the town to extravagant bachelorette parties, Annie goes from the dull life of the unemployed to the hurried life of a wedding planner. Problems begin to arise when she must compete with a rich, outgoing bridesmaid who seems to know her best friend better than she does.

Wig does a wonderful job playing her character, and her acting skills don’t disappoint when she is able to make the viewers switch from laughter to tears within seconds. Melissa McCarthy, playing sister-in-law Megan, steals every scene with her hilarious antics and is definitely the funniest character in the movie.

Wig, also co-writer of the movie along with Annie Mumolo, did an exceptional job at avoiding dwelling on the sad moments of the movie. They plow through the sappy scenes and bring us back to the hilarity of each situation.

“Bridesmaids” is full of constant laughter and non-stop entertainment. Moments that would normally seem incredibly touching are immediately ruined by unfortunate turns of events, like getting food poisoning or ruining the bachelorette party by being kicked off the plane. Watching five women run around in thousand-dollar dresses ready to vomit and avoid catastrophe makes the two-hour movie enjoyable.

Full of awkward silences and long laughs, the pacing of the movie is extremely slow, making it ten times better. “Bridesmaids” does not hold back on innuendos and grotesque scenes. Rather, it embraces the hilarity that is being a bridesmaid.