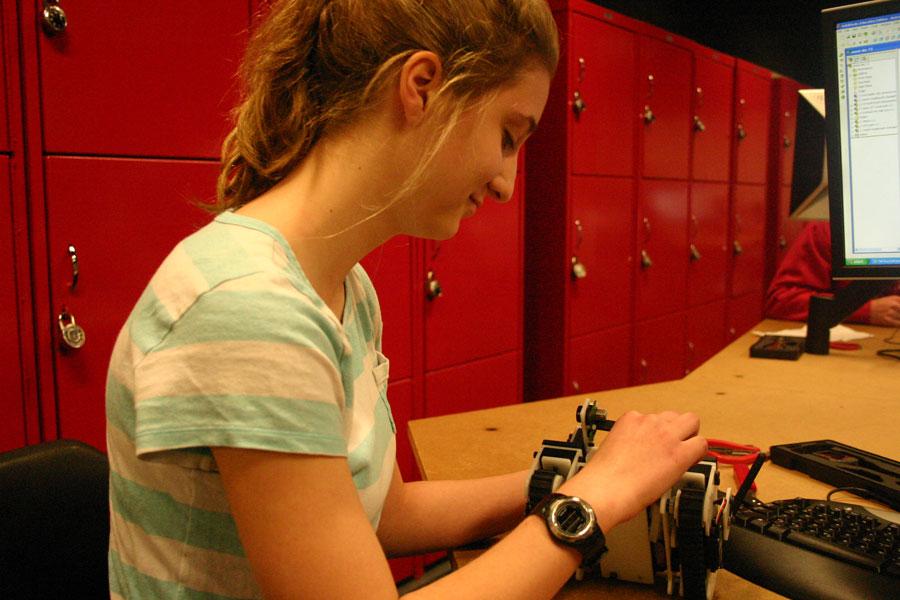 For senior Irena Cich, the sciences are more than just a normal passion. Not only does she love physics, but she also enjoys advanced competitive science and AP Biology.

From a very early age, Cich has loved engineering. “I went to a hippie school [for 1st grade]. During recess they would give us saws so that we could construct things of sort, but I did use it one day. My friend hurt her ankle, and I cut off a stick and gave it to her as a cane,” said Cich.

Cich has always used her sense of curiosity and strong scientific creativity for the good of others, like how she spent her summer volunteering at the Bakken Museum. “We do static electricity stuff, like ‘the wooo big hair!’ And one time I had to explain to kids the physics of electricity, but I didn’t know it yet because I didn’t have [Mr. Jim] Wander yet,” said Cich.

Her love of biology exists outside of the classroom, too. “When I was in 6th grade, we were doing an experiment with fruit flies, and I decided to take a male and a female home to see if I could mate them and see if their offspring had any mutations. So I was at home and I had this little vial, and I took this big container and tried to separate them and see. Then we had an infestation,” said Cich.

The experiment wasn’t a total failure. “I think there were two albinos,” said Cich.

Irena seems to find success in everything she does, like living in the German speaking part of Switzerland, despite having learned French. “My favorite German word is ‘Krankenschwester.’ It means ‘nurse,’” said Cich.

Living abroad has expanded Cich’s understanding of others. “When you go to Switzerland and you’re surrounded by all these people from all over, you realize that we’re all the same, we all have the same sense of humor, we all just want to laugh,” said Cich. “That’s my pearl of wisdom from living abroad.”

Cich has a chance to go abroad again this summer, to Turkey with ACS. Cich and two other BSM seniors learned how to code in two days and gave up their spring break to travel to Duke University for a competition. “I am so excited because we are the only US team going. All the other teams are from Japan, Australia, China, and Germany, and other places,” said Cich.

But what Cich is most excited for:“I looked through Saveur [a food magazine] in their Turkey section and it looks delicious,” said Cich.

To many, it may seem strange for a girl to be so interested in pursuing the sciences; a fact that Cich is all too aware of. To help remedy the gender disparity, Cich organized an event for women interested in engineering. “I worked with Mrs. [Patty] Gilmore and we talked to the Society of Women in Engineers in Minnesota and organized a lunch where a speaker came and spoke to about 20 girls,” said Cich.

This summer, Cich is interning with American Heart. “I get to work in the lab of Dr. Richard Bianco and do experimental surgery,” said Cich. “I’m so pumped to be around people who just made that their life’s passion.”

But even Cich couldn’t do it alone. From getting her a job interview at the Bakken Museum to encouraging her to start a photo club in her sophomore year, Cich’s mom has played an integral role in her life. “My mom pushes me to do everything. I have to give her credit,” said Cich.

Cich plans on attending Worcester Polytechnic Institute in Massachusetts in the fall. She intends to use her love of science and major in biomedical engineering.