Book 1: In Public With Another Man 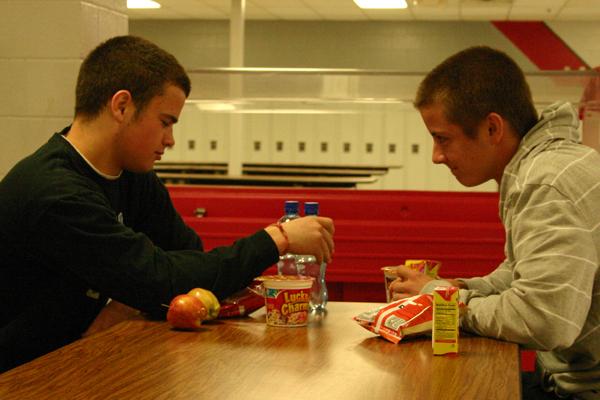 Most of the time, men are committed to their families, spouses, or jobs. However, occasionally they break free from these commitments and are permitted to rendezvous with other men. These rendezvous are commonly referred to as “man dates.”

When on a man date, men will go to dinner (usually a bar), watch some form of television, embrace each other tenderly and call it a night. Over the course of the date, men will inevitably present themselves to the public and, in order to avoid the degradation of their manliness, they follow certain guidelines.

1. When at dinner, the men must sit across from each other. Sitting next to your “man date” would result in the public believing the two men were, in fact, together. Plus, sitting adjacent to each other would create an environment filled with personal space invasions: elbows would bump when using silverware, hands would graze when reaching for a drink, and worst of all, food could accidentally be shared while eating.

2. No matter the occasion, men cannot share any portion of their meals. The question, “hey man could you help me out with this?” does not exist on a man date, it is strictly forbidden. Sharing food is a sign of submission to the other man who is manly enough to finish his meal. If a man cannot finish his meal, he must shovel it down at all costs. Getting a box is a girlish thing to do, and leaving nutrition on a plate is simply embarrassing.

3. During the television portion of the man date, sitting formations must be used. For example, when at a movie with another man, a buffer seat must stay between the two men to prevent any contact that would result in misunderstandings. If a situation where a buffer seat is not available applies, the two men must look for seats between two women, and put the arm rest down between each other.

4. When the date ends, men must leave each other with some form of contact. The preferred practice is a handshake that merges to a one-armed hug, with faces directed slightly away from one another, to avoid facial contact. The less preferred, but still acceptable man hug involves both arms, but each participant must also employ a “pat” with at least one hand, so as to distinguish the man hug from any hints of romantic hugging. The “pat” is not to be mistaken for the “rub,” as a rub would signify romance.