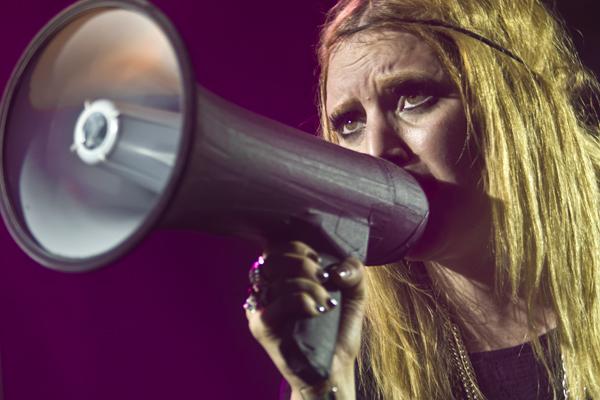 If “Wounded Rhymes” proves anything, it is that Li has changed from a sweet Swedish songbird into a heartbroken ice princess that is equally forlorn as she is fiesty and intimidating while still maintaining her artistry and individuality.

Born Li Lykke Timotej Zachrisson, the artist spent most of her childhood traveling around the world with her mother and father, a photographer and musician, respectively. Li moved to New York when she was 21 to begin recording “Youth Novels” under producer Björn Yttling of Peter Bjorn and John.

Since the release of “Novels,” Li has been featured on “The Twilight Saga: New Moon” soundtrack and produced several popular covers, keeping her on the radar until she released the first new single of “Wounded Rhymes,” “Get Some.”

The multi-faceted follow-up album contains the same variety and appeal as Lykke Li’s debut album. The more upbeat and heavily percussive beats present on “Youth Knows No Pain,” “Rich Kids Blues,” and “Jerome” complement the lyrical vocality of ballads like “Unrequited Love,” “I Know Places,” and “Silent My Song.”

“Rhymes” also provides the stark contrast between happiness and depression that was previously present on “Novels.” Li has the ability to write raw and personal lyrics and then twist them into an extremely catchy tune.

Upon a second, and more attentive listen, “Wounded Rhymes” is, in fact, a heavy and dark compilation of wounded rhymes. A prime example is the desolate and slightly sixties “Sadness is a Blessing,” in which Li’s hauntingly beautiful voice exults, “sadness is a blessing, sadness is a curse, sadness is my boyfriend, oh sadness I’m your girl.”

Part of the ambivalent mix of bleak lyrics with fiery performance is due to the fact that “Wounded Rhymes” was written during a post-breakup period. This explains the transition between singing of being “a little bit in love” on “Novels” to proclaiming “you silent my song.”