Military families within our own community 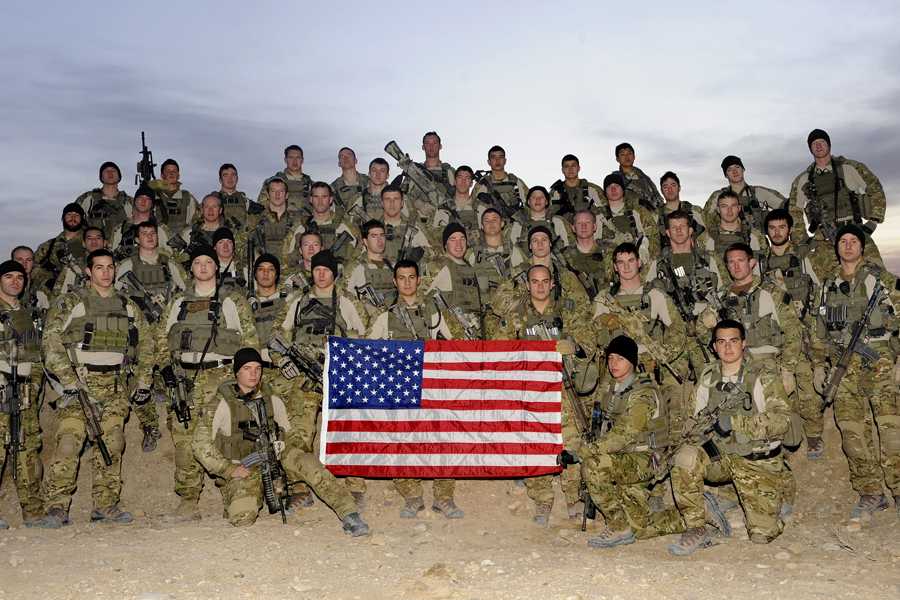 Having a sibling or parent overseas is not a burden that many struggle with, but for four Benilde-St. Margaret’s students, learning how to live with the emotional hardship that accompanies their family member’s service in the military is a daily battle. A loved one’s absence becomes a substantial aspect of life when considering that the temporary time away may transform into a permanent hole in a family.

Many military families are put under great amounts of emotional stress when considering their children’s or sibling’s line of duty. Sophomore Mary Grace Arndt, and the rest of her immediate family, fight their own battle at home while trying to cope with the lack of knowledge that comes with brother and son Eddie’s service in the army. “There is a level of frustration, because you’re curious. But most of all, you want to give them some kind of comfort––some kind of love––to make their lives easier and to give them a break from what they’re doing.” said Susan Arndt, mother of Eddie, sophomore Mary Grace, and eighth grader Brian Arndt.

In the Arndt family, Eddie was the first brother to join the army and be deployed over seas, he is a member of the Special Operations Command and works as a certified interrogator and human intelligence collector. However, Mary Grace’s eldest brother, Andrew, also works for the army as a lawyer and member of the Judge Advocates General, another division of the military. In a years time, Andrew will be deployed over seas to continue serving his country, leaving his family back home to worry about both brothers’ safety.

Because of their jobs, Mary Grace and her family have difficulty communicating with both of the brothers. “I don’t get to see them a lot. We Skype with Andrew a lot, but he has a family so he can’t just drop everything and visit us. Whereas, Eddie we see three times a year. I feel like we see Eddie more in person even though we aren’t allowed to Skype with him when he is deployed, because talk-time is extremely limited” said Mary Grace Arndt.

The Arndts face the continuous challenge of trying not to worry for the safety of their loved ones. Their relationship with Eddie is truly tested through the limited communication. “You have to find a new normal. The tendency is to worry because it’s your kid, but after a while you realize that there’s not much to worry about unless someone tells you there’s something to worry about. ” said Susan Arndt.

Families with relatives in the military are left alone in the dark, privy to minimal information regarding the whereabouts and safety of their loved one. “[The lack of information] doesn’t make it worse. But it is hard to support him when we can’t be in his life and have those conversations with him. It’s not worrisome but it is frustrating,” said Susan Arndt.

Not a day goes by in Mary Grace Arndt’s life without the thought of her brothers, but coping with their deployments has become habitual. “There were two times when Eddie was deployed that I got really sad, and I just ended up writing a letter and that made it better. But, I think about Eddie and Andrew everyday, and I always wish I could call them more,” said Mary Grace Arndt.

The entire Arndt family feels much distress in his absence, but over the years Eddie Arndt, who is approaching his deployment, has had to deal with his fair share of challenges, beginning when he chose to enter the army. “I decided to join on September 11, 2001. It was tough to gain perspective on something that very few people have. I also had to consider the fact that I was joining during a time of war,” said Eddie Arndt.

Many people lack perspective when it comes to the military. It is common for friends and acquaintances of military families to react improperly when learning about someone’s service or approach to deployment. “Everyone means well, but most of the time they just say the wrong thing. But some people say the right thing at exactly the right time. It just doesn’t affect many people in the same way, some are just asked to sacrifice more than others,” said Maureen Shaver, mother of Craig and Spencer Shaver.

Craig Shaver, BSM graduate of the class of ‘09, recently returned from his first deployment with the Marine Corps. For five or six months, he served on a naval ship outside of South Korea where conversation with his family strayed from his life as a marine. “It’s hard to be a part of his daily life. We hear about things a few days after they actually happen. Not only do we not know what’s going on, but he could be in harm’s way. But, he knows we’re worried so he talks more about stuff at home than what he’s doing,” said Maureen Shaver.

Spencer Shaver never had a choice when it came to losing one of his best friends. Everyday, he must try to live a normal life while his brother, Craig Shaver, fights overseas, risking his own life and the emotional health of his family. “I definitely respect what he’s doing, but having no brother sucks. I miss seeing him,” said Spencer Shaver.

Craig Shaver’s service has impacted his brother in a variety of ways, including influencing his own decisions about the military. “I’ve considered [joining the military], but Craig has urged me against it because he wants me to go to college. If I were to join, I would do it after college. Also, I think I would have a better idea of what I was getting myself into,” said Spencer Shaver.

Although the Shavers look forward to nothing more than the chance to speak with Craig, it takes a heavy toll on their emotions to see his internal struggles. “It’s always great to hear from him and to hear that he’s doing well. But when you Skype with him, and he looks a little down because he’s tired or homesick, that’s hard,” said Maureen Shaver.

Craig Shaver serves alongside his friend and former classmate, Harry Torvik, who, like Craig, spends five to six months away from his family serving as an anti-tank in the Marine Corps. “I don’t worry about Harry’s safety because he’s not in any areas with fighting, but I will worry when that time comes.” said sophomore Frank Torvik, Harry’s younger brother.

For Frank Torvik, the pain and worrying that is often associated with over-seas service are less prominent when considering his brother Harry. “It hasn’t really affected my life much,” said Frank Torvik. “I would compare it to a sibling going to college.”

Torvik and his two other brothers choose to view Harry’s service in the military as positive; however, that does not keep the Torvik parents from worrying. “My brothers and I are all, for the most part, proud, but I think my parents worry the most,” said Frank Torvik.

Another BSM Student, sophomore Billy Lundberg has to deal with a slightly different situation than his peers. Billy has been forced into maturity as he tries to fill the role of his father, a doctor in the army. “When my dad’s not at home, I have to try to be the man of the house,” said Lundberg. “I have to cook, clean, and take care of my younger siblings.”

Billy’s father, Bill Lundberg, serves as a surgeon in the Army, operating on injured soldiers in Sharana, Afghanistan. “I’m always afraid that he’s going to get shot, but I know what he’s doing is good for the country, ” said Billy Lundberg.

The adversity of dealing with an absent father may seem endless, but Billy Lundberg remains strong for the sake of his mother and younger sister. “They worry the most out of anyone in my family,” said Billy Lundberg. “It scares them that they don’t know what’s going on. But, sometimes he does tell us everything that’s going on and we worry more. That’s the worst.”

Having a loved one serve in the military does more than just afflict family members with the emotional burdens that accompany such a lifestyle. A sibling’s or parent’s service can produce an abundant appreciation for the military that only a small percentage of people have. “I’ve always had an appreciation for the army, but I’ve learned more through being more involved. And I have always been proud of [those serving our country] having done what they’ve done,” said Susan Arndt. “As my sister always says, we are the home of the free, because of the brave.”