Tales of a wannabe thespian 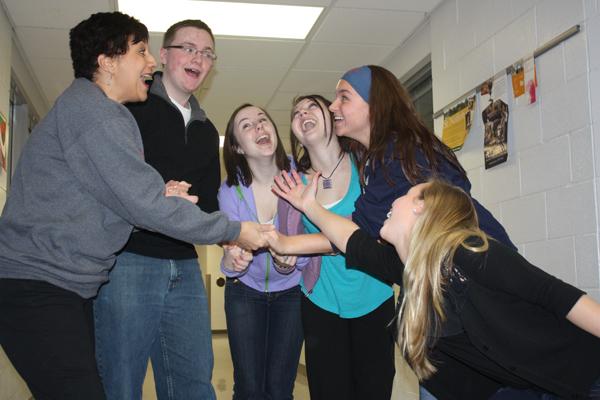 “O Romeo, Romeo. Wherefore art thou Romeo?” All it took was one play about some star-crossed lovers, and I was hooked. During my freshman year, the theater kids, affectionately referred to as The Thespians, put on a highly-captivating, obsession-inducing adaptation of Shakespeare’s classic tragedy, “Romeo and Juliet.” After the first three times I saw it (I saw it eight times…), saving all of the playbills for my soon-to-be Theater Shrine, I knew I wanted to be like those glamorous people up on the stage. I wanted to be a Thespian.

I soon discovered that my transformation to Thespianism would be a lengthy, fatiguing, show tune-filled road. My first step was to dedicate myself to researching all of the theater kids I knew. Though it was a risky operation, I decided to carefully force myself into the dramatic lives of a few unsuspecting Thespians who would serve as my primary subjects of study.

With the help of Ms. McDonald’s bribe-inspired seating chart, I was soon able to trap a few of the tenth grade theater phenomena in my presence for a solid forty-five minute stretch during second semester period 4 Spanish II. Quite pleased with myself, I spent the first few weeks quietly observing the behavior of my new, theatrical guinea pigs. No, seriously, I was completely silent. It was not until I felt I had sufficiently begun to understand their Thespian rituals––the singing in class, translating play lines to Español, adding “Shm-” to the beginning of every word, etc.––that I felt confident enough to engage in casual conversation with them. Slowly, they accepted me as their “awkwardly half-mute freshman acquaintance.” I was so in.

Weeks passed, and my Thespianism goal seemed closer than ever. At this point, I was practically best friends with my subjects. I mean, we didn’t hang out on the weekends or anything, but I did spend a lot of quality time with their Facebook profiles, analyzing the most recently added photos and status updates in order to feel like I was part of their Thespian-y activities.

But there came a day when I was hit square in the face with a big, fat reality check. It started with a normal Spanish class, filled with verb conjugating, vocabulary memorizing, and constant Broadway Hit-humming from my theater pals. Then suddenly, as if they were cued by some invisible director to take center stage and commence singing, my subjects burst out into a perfectly harmonized chorus of “West Side Story”’s “The Jet Song.” I, being a theater aficionado and self-proclaimed Thespian-in-Training, felt obligated to sing along, and I didn’t hesitate to shout, “When you’re a Jet, you’re a Jet all the way!”

My horrendous scream-singing was met with raised eyebrows and dirty glares from the Thespians. “Ummm… how do you know that song…? Are you even in the spring musical…?” they asked simultaneously. That’s when it hit me. The Spring Musical. I had clearly overlooked a crucial element in my Thespian research stating that in order to be a theater kid, one must actually participate in theater.

With that, I realized that I was, and would always remain, a mere Wannabe Thespian.