My goal in life: GSOTM glory 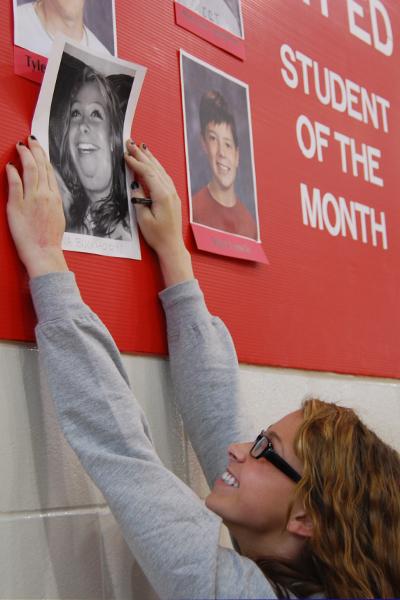 The awkwardly large versions of the already awkward student ID pictures smiled down at me from the Haben Center wall. So you’re gym student of the month, big deal. It must be comforting knowing you’re one of the blatantly un-athletic kids that the gym teachers feel sorry for.

But deep inside, past my clearly athletic and godlike physique, I was dying to be gym student of the month. I was going to do whatever it took, even if that meant becoming hopelessly uncoordinated and eating gym floor three times per class.

Despite my desperate attempts to become awkward (it’s difficult for someone as elegant as me), Mr. Hansen was not impressed by my “athletic” ability. It was time to take a new approach.

I tried everything. “Mr. Hansen, that shirt really brings out the auburn tones in your eyes.” Nothing. Threats were my next best bet. “Don’t think I don’t know where you live, Casey Hansen.” Still nothing.

After nearly a semester’s worth of tripping on my shoelaces and getting hit in the face with balls, I was no closer to my destiny than I was at the start. But if Sports Center specials have taught me one thing, it’s that cheating is the key to success.

All I needed was a large, particularly awkward photo of myself, some tape, and about 500 business cards saying, “Dana Buckhorn: Gym student of the month/phys. ed extraordinaire.” It was about as legitimate as 90 percent of Facebook relationships, but I deemed that insignificant.

Through my crude tape job, the current, unworthy, gym student of the month was removed from power all together and forced to face life as an ordinary student.

My purpose in life had been fulfilled. Being the best-looking and most popular student in school was great, but being gym student of the month was all I’d ever wanted. I am now the most powerful person alive.

Life as a gym student of the month is everything I ever dreamed it would be. People often refer to me as “White Gandhi” or a hotter version of Paris Hilton, but I like to think of myself as just a normal high school student. Except much, much better.