Pass up this new mash-up 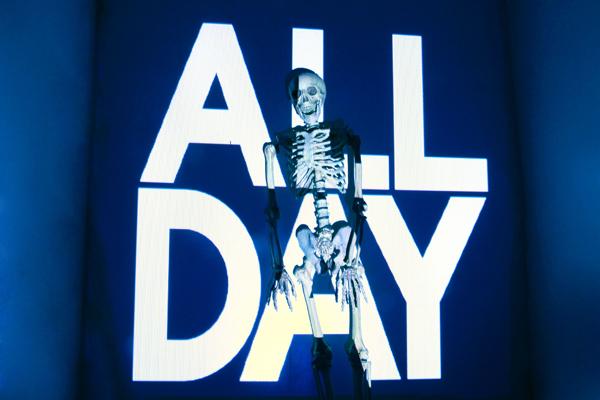 The “blender” metaphor is so cliche, but I don’t think I can help but use it when talking the newest Girl Talk album, a nonsensical juxtaposition of top-40 samples and ultra-catchy dance beats aptly titled “All Day.”

If you don’t know who Girl Talk is, then there is something wrong with you. Greg Gillis (aka Girl Talk) is a mash-up DJ straight out of Cleveland that prides himself on a New York Times Magazine quote that calls his music “a lawsuit waiting to happen.” He changes the musical context of easily recognizable pop-songs to give his audience new perspective on songs (again with the cliches) we’ve all come to know and love. Example, on the opening track “Oh No” Gillis mixes Jay-Z’s “Encore” with Black Sabbath’s “War Pigs.” Sure it sounds awkward, but he makes it work, more importantly, he makes it catchy.

Unfortunately “All Day” as a whole lacks the shock value, novelty, and campiness that Girl Talks previous album “Feed the Animals” brought. The whole album is basically an easter-egg hunt where you try to find your favorite samples. None of the songs sound like they belong together like they did on “Feed the Animals.” The one exception might be “This is the Remix” which I give kudos for effectively blending the ultra-obscure Toadies song “Possum Kingdom” with B.o.B’s wildly popular “Nothing on You.”

The weird thing about this album is, you find yourself loving thirty seconds of a song and then completely abhorring the rest of it because it wasn’t as good as those previous thirty seconds. In the seventh song “Get It Get It” from 2:01-2:29 there is a hyper hooky mash-up of Rage Against The Machine’s “Killing in the Name” with M.I.A.’s protege “Rye Rye” rapping over it. Part of me thinks the whole album is worth downloading because of those 28 seconds. That’s the problem with non-linear song structure, nothing repeats itself for long, even the things you like.

The whole idea of Girl Talk is to be gimmicky. He deconstructs pop hits and then reconstructs them in a completely different manner. In this respect, the album is a success, if you ever completely forget what popular music was like in your teenage years then by all means, crack out this album and use it as a crib sheet. For those of us who loved “Feed the Animals” don’t even bother with this album, if you’re looking for something to dance or rave to, then you’re much better off waiting until the new Justice or SebastiAn album drops. Then again, “All Day” is free on Gillis’s Illegal Art website…you make the choice.