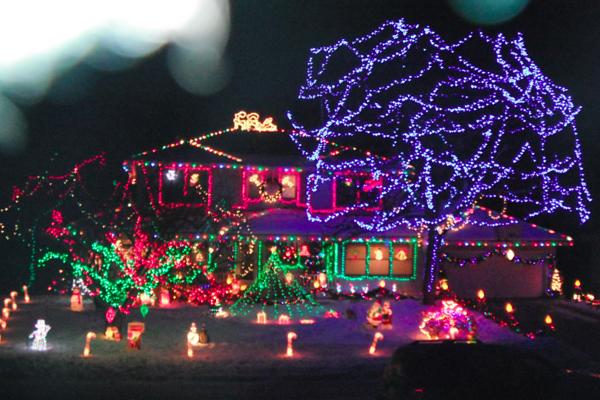 In the Perrine household Christmas is one of the most celebrated holidays. With many family traditions, the one that brings their family the most holiday cheer is their Christmas lights.

Every year, a few days before Thanksgiving, Mr. Perrine can be seen on his roof for hours each day hanging up his famous Christmas lights. “My father mainly puts them up because if we do it wrong he’ll just fix it anyway,” said senior Natalie Perrine. About three days later, approximately 40,000 cautiously put up lights are ready for their debut.

The year 1978 marked the start of the Perrine’s lights; however, they consisted of just one row of lights across the front of the house. Realizing this was not enough, they started adding more lights every year. The Perrines love the Christmas spirit that comes with decorating the house with thousand of sparkling lights; however; the decorating of the house was not entirely their idea.

The Perrines bought their house from a man who was a Christmas light fanatic as well; he entered and won several competitions just for his lights and decorations. When the Perrines moved into the house, several neighbors approached them informing them that they had to continue the tradition.

Every year there are new additions to the decorations. Mr. Perrine’s birthday is close to Thanksgiving, which makes it easy for the family to find presents. “We always give him a new light decoration to put up that year,” said Perrine.

The house is so bright that it can be seen while driving on Highway 100 north, crossing over Highway 62. “We’ve been told that airplanes landing at the Minneapolis airport can see them as they descend,” said Perrine.

Ever since their first Christmas in this home, the Perrines have carried on the tradition and lived up to the expectations of their neighbors. Now, every year after Thanksgiving dinner, neighbors join the Perrines outside for the debut of their annual Christmas lights and decorations, and to see what has been added from the year before.