Christmas sweaters all around 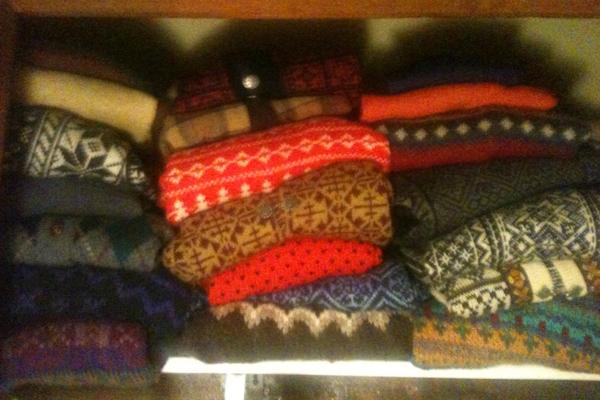 As the seasons change and the snow begins to fall, the ironically hip “ugly sweaters” emerge as one of the hottest trends rocked by nerds and Holiday Ball kings alike. The limitations are endless as every year students manage to find sweaters uglier and more outrageous than the years past.

Each year, students prepare their minds and sweaters for the day when Dean Keith Jones whips out one of his 40 legendary Christmas sweaters. That day marks the beginning of the highly anticipated sweater season. “As soon as it starts to get colder, you’ll see my sweaters start to come out,” said Mr. Jones

Trendsetter Mr. Jones inspired students as he created his medley of sweaters from a variety of different countries including Norway and Nepaul. “I just started picking up sweaters at different places while traveling,” said Mr. Jones. “After that I found myself buying them at thrift stores, and pretty soon I was getting them as gifts.”

Students around school are aiming to become Jones look-alikes as they strut their stuff in secondhand Christmas sweaters. “They’re the hottest trend on the runway,” said sophomore Krista Marshall.

Not a sweater person? Not a problem, because according to Mr. Jones, festive sweaters suit all types of days, people, and places. “There are some that are dressy, some that are informal. Some are even too heavy to wear to school,” said Mr. Jones

Don’t be fooled by their extreme comfort and versatility, the sporting of sweaters can be risky business. “When you have sweaters that are so unique, you really have to make sure you’re not wearing them too often because people will notice,” said Mr. Jones.

While looking to stock up for the winter season, Ragstock remains the go-to place for both newbies and experienced sweater-wearers. “They just have racks of the weirdest sweaters ever,” said freshman Kelly Pannek.

Ragstock employee Liza Davis has learned to brace herself for the high-demand of sweaters throughout the winter. “About a third of our store is dedicated to Christmas sweaters. We get new shipments every week,” said Davis.

This style is not contained to certain cliques or types of people. Sweaters can make friends with anyone. “All kinds of people come in here looking for secondhand sweaters,” said Davis. “I guess they’re super trendy now.”

Despite this recent buzz, some students consider themselves anti-sweater. “I don’t get the big deal,” said sophomore Bailey Forcier. “They make people look fat.”