Student council steps up their game 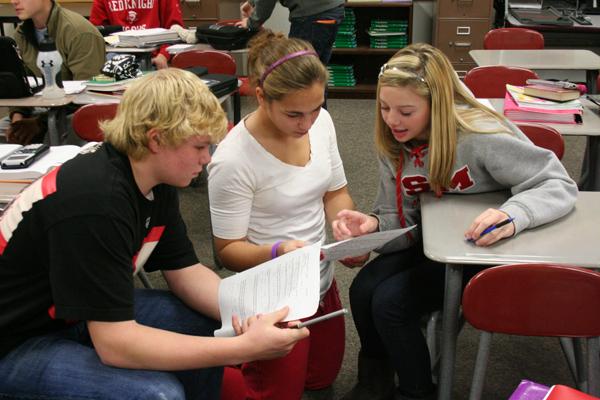 Many members of the student body may be under the impression that the elected student council does very little aside from organize school dances and eat doughnuts in homeroom. The members of this year’s student council plan to prove their peers wrong by creating new activities and becoming a go-between for the students and administration.

So far this year, the members of the student council have brainstormed various ideas for events that will further involve the student body. “We want to work with the Student Leadership Forum on sending care packages to troops serving our country, that’s our most recent project. We’re also planning on doing service opportunities like Feed My Starving Children,” said Spencer Shaver, the sophomore class president.

Thinking further into the future, plans for a talent show in the spring might begin to materialize. “We’re making an effort to put together new events that the student body will enjoy,” said Sarah Silvestri, the junior class vice president.

The more traditional activities that the student council organizes include the three school dances––seniors are in charge of Homecoming, juniors are in charge of Holiday Ball, and the two work together to coordinate Prom. Underclassman organize events like the Candy Cane Drive, which is run by the Freshman Class Board, and February’s Data Match, which is run by the Sophomore Class Board. “Last year, student council started the dodgeball tournament, and that’s something we’re hoping to continue with through the years,” said Schubloom.

The two pepfests, Homecoming and Winter Wipe-Out Week, tend to be the most time-consuming of all the events the Student Council organizes. “Other events that the student council coordinates include the more informal dances as well as various food drives; but the biggest commitment is homecoming week. We do way more work than people think for [the pepfest] events,” said Maddy Moore, the commissioner of student activities.

The problem that the student council has faced over the years when it comes to organizing events is the lack of student participation. “Events are tough, students say stuff like ‘you don’t plan any events,’ but a lot of the time we do, and students just don’t show up,” said Peter Schubloom, the student body president.

Aside from event planning, the leaders of the student council also want to create ways for the students to communicate their ideas and concerns through their elected representatives. “We’re trying to figure out ways that kids can give us feedback. Right now, we’re thinking of something on Edline, so kids can report when they may see a problem or something that they want to change,” said Schubloom.

However, in order for such an idea to work, students must be vocal about changes they would like to see. “It’s hard to fix something that we don’t know is broken. Unless we are aware of issues and complaints that students have, we can’t do anything about it,” said Moore.

Considering the many changes made around the school this year, the student council’s link to the administration is a tool that students can utilize to voice their concerns and ideas. “This year the biggest problem seems to be backpacks. We’re trying to tell people to talk to us so then we can talk to the administration. We’re student leaders so that’s kind of our job,” said Schubloom.

Despite the frustration expressed by numerous members of the student council regarding the lack of feedback, BSM’s student leaders are in no way oblivious to major problems around school. “It’s difficult when people just expect us to deal with [certain problems], but I think we recognize a lot of the problems too,” said Silvestri.

The members of the student council have always taken on a certain amount of responsibility as student leaders planning events and communicating with the administration. “I wouldn’t say [the student council] has ever been uninvolved, but there’s a different vibe every year in the homeroom, and this year [the seniors] want to get a little more involved,” said Shaver.