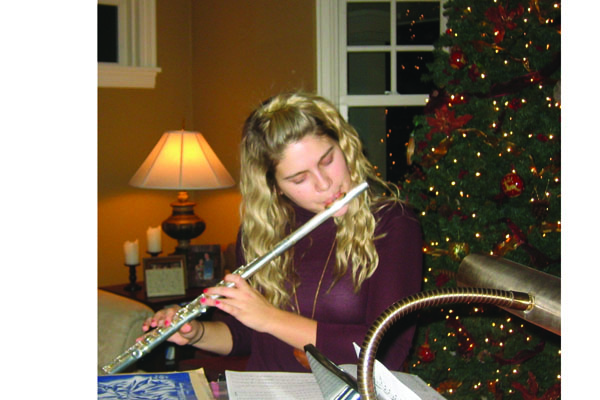 Since she was a baby, junior Natalie Johnson has had an Advent Angel buying her a gift. “Every year after Thanksgiving dinner, all of us ten kids put our name in a hat, then we mix it up and pick someone’s name out of the hat, and that’s our Advent Angel for that year,” said Johnson. Since there are ten kids in her family, Natalie’s mom only wanted them to have to buy a present for one of the siblings. The presents range from dolls to movies to clothes depending on which sibling they get. “My favorite part is that I don’t have to buy nine people presents, and I like shopping for my sisters way more than my brothers,” said Johnson.

Home for the holidays

Many people can call staying in Minnesota being home for the holidays, but for sophomore Darcy Spiller going back to her homeland of Australia is being home for the holidays. “For Christmas I’m going back home to Australia to visit my family and friends,” said Spiller. She’ll be home for three weeks, and the Christmas traditions she has there are not like the traditions in the U.S. “It’s different. Santa wears a Hawaiian shirt, and we put fake snow in our windows,” said Spiller. Since the weather is hot there on Christmas, she goes to the beach and boogie boards.

Most Christmas trees are decorated with ornaments; however, junior Paul Kretsch has a Christmas tree that is decorated with hot dogs. “It’s a ceramic Christmas tree with holes that my grandma puts little hot dogs on toothpicks in,” said Kretsch. It’s a family favorite appetizer that’s been at every Christmas he can remember; however, not everyone in the family enjoys it. “I’m the only one in my family who doesn’t like it. As soon as my grandma makes it everyone else rushes to it,” said Kretsch. The only thing Kretsch likes about the appetizer is the way it looks when it’s finished.

The story of the birth of Jesus is an important event to remember in the Karlen family, especially because every Christmas they perform it. “We have a Christmas pageant every year where we reenact the whole story of the birth of Jesus,” said sophomore Bobby Karlen. He and his family have been performing the story for as long as he can remember. They perform it as a family, and everyone on his mom’s side of the family gets dressed up and participates. “I always play Joseph and my favorite part is getting to hold up baby Jesus at the end of the show,” said Karlen.

For as long as sophomore Abby Deutz can remember, the week before Christmas is filled with little green pickle ornaments hanging from her tree. Those little green pickles are the source of a daily event that happen in the days leading up to Christmas in the Deutz’s household. “Every morning during the week before Christmas my mom hides a pickle ornament somewhere in our Christmas tree,” said Deutz. The finding of the pickle ornament then becomes a competition between Abby and her siblings. “Whoever finds the ornament first gets a special prize that day. One year I got a sweatshirt, but other presents could be like a bag of peanut M&Ms,” said Deutz.

For the past five or six years freshman Jackson Guettler and his younger brother have started their own Christmas tradition that happens every Christmas morning. “At about 5:30 in the morning on Christmas Day me and my little brother go downstairs to watch “A Christmas Carol” together,” said Guettler. They watch the timeless classic for about an hour until their parents come downstairs and the Christmas festivities begin. “My favorite part is the anticipation of my parents coming downstairs so then we can open presents,” said Guettler.

Every December 26 freshman Jazmyn Snelson and her mom and brother head out bright and early to the hectic and crazy MOA. “We go to Mall of America every year from seven in the morning till one in the afternoon,” said Snelson. This tradition has been part of their family for the past seven years. They shop for everything from clothes to electronics, and her favorite part of the tradition isn’t all of the shopping they get to do; rather it’s just getting to spend time with her family.

Each Christmas Eve senior Emma Forschler waits in anticipation for her package from Mrs. Clause. “Every Christmas Eve we all open a set of pajamas from Mrs. Clause and then have to wear them all night,” said Forschler. This is a longtime tradition in the Forschler household, and the pajamas can be anywhere from cute and normal to festive and gaudy. “One year I got a long sleeve plaid night gown complete with white doily trim on the edge of the sleeves,” said Forschler. While wearing the pajamas, they all take part in family activities, such as having a birthday cake for Jesus and blowing out the candle together.

Christmas in the City

For the past four Christmases, junior Liz Tyhacz spends Christmas in the city, as in New York City. “On Christmas Eve we always go see a play on Broadway as a family,” said Tyhacz. She, along with her immediate family, have seen “Wicked,” “Hairspray,” “The Lion King,” and “Mamma Mia.” “This year we’re probably going to go see “Wicked” again,” said Tyhacz. The theaters are always crazy and really full, but that just adds to the fun. Along with seeing an amazing performance on Broadway each year, the Rockettes always perform before each show.

The 12 days of Christmas

Every year around Christmastime the Glover parents are always busy because Mr. Glover works in the music department at St. Terese’s Church. They found the perfect solution to keeping their busy schedule free from crazy shopping trips and wrapping a lot of presents the week before Christmas. “On each of the 12 Days of Christmas, my kids would each get one present,” said math teacher Mary Glover. The 12 Days of Christmas begin on December 25th and go till January 6th. “They would each get one present on Christmas Eve from Santa, and then the 12 Days of Christmas presents were our presents to them,” said Mrs. Glover. Those 12 presents would range anywhere from a fun family night out to the movies or a present that they asked for on their Christmas list.

Junior Logan Schwartz’s house made KARE11 nightly news back in 2000 for its crazy Christmas lights; however, the number of lights they use has gone down. Putting up a lot of lights is still a yearly Christmas tradition at his house. “My sister usually draws out the plan for our yard and what color lights go where. Then me and my dad will go out and put them up,” said Schwartz. The process of putting up the lights takes about five hours, and his family has been putting up a ton of lights since he can remember. The year that they made it onto the news was because of one special invention his dad made. “My dad took plastic cups and glued them together in a ball formation, then he strung lights through them, and hung them in our trees,” said Schwartz. His favorite part of the whole event is seeing the final product.

Ham and noodles is a 40 plus year old tradition held by the Gerten family. “Every Christmas my family cooks ham and noodles, which is a hot dish baked in the oven for one hour,” said junior Michael Gerten. On Christmas Eve, Michael and his extended family all get together at a family member’s house for a gathering and to eat the now infamous family dish of ham and noodles. The tradition of eating ham and noodles on Christmas Eve was started by Michael’s grandparents over 40 years ago, and is one tradition that will be carried on for many more years.

For most people getting socks as a Christmas present is kind of a let down, but for freshman Michelle Sauer, getting her sock present is an event. “Every year my grandparents give everyone in the family a pair of crazy socks, and they wrap them up in every kind of tape imaginable,” said Sauer. Her grandparents use every kind of tape including duct tape, electrical tape, and clear packing tape. “The clear packing tape is the worst because you can’t see where it starts,” said Sauer. Once the tape-wrapped sock presents are distributed, her grandparents then time everyone in her family to see who can open them up the fastest. But here’s the catch, you can’t use anything but your hands. She has won this sock opening extravaganza once.

When most people receive a present, there’s a tiny card on it that says who it’s to and from; however, when sophomore Colleen Vollbrecht gets her presents on Christmas, she has to decode the package before she can open it. “Instead of putting names on the presents, my grandma puts codes on them and before we open them we have to decode what the note says,” said Vollbrecht. It takes a long time to decode the message, especially one year when her grandma accidentally messed up the code. “We’ve been doing this tradition forever, and my favorite part is getting to decode the message because it’s fun,” said Vollbrecht.

When lakes freeze over most of the festivities that happen at lakes take place on top of the ice like ice skating and playing hockey But what freshman Isaiah Beise likes to do when lakes freeze over takes place under the ice. “My neighbor drills a hole in the lake on the first Monday of Christmas break, and my neighbors and I always jump in the lake,” said Beise. This has been a tradition in Isaiah’s life for the past three years and it’s one he hopes to continue. “My favorite part about it is the experience because it’s so much fun,” said Beise.

For sophomore Kaitlin Duda’s entire life, she has spent every Christmas with her family breaking the Oplatek. “Because my family is Polish, every Christmas we always break this thing called the Oplatek, which is bread that tastes like Styrofoam,” said Duda. The bread reminds Duda of the bread that they have at Mass. Her grandma is one hundred percent Polish, so this is a tradition that is very important to her because it represents where she comes from. “My favorite part is that everyone has to share and have the bread before we can move on to other things,” said Duda.