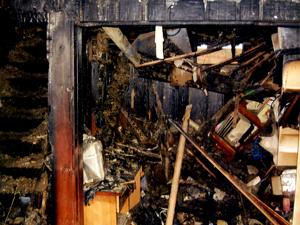 Spring break ended in tragedy for one member of the BSM community. Ms. Mary Seppala, a math teacher at BSM, and her husband, Dan, returned home from a road trip to Arizona to find their house charred black and billowing

“We turned the corner of my block and we saw the whole block lined up with fire trucks,” said Ms. Seppala. “We parked our car and ran down the street. We found a firefighter and said ‘That’s our house!’”

The fire department had been attempting to fully put out the fire since the previous afternoon. “The assistant fire chief told us everything that had happened,” said Ms. Seppala.

Friday afternoon, the mailman saw smoke coming from Seppala’s house. He informed one of Seppala’s neighbors who is a firefighter EMT. The neighbor checked it out briefly and made a call to the fire department.

Ms. Seppala says she made a mistake by not informing her neighbors that she was going on vacation. None of them knew where the Seppalas were. “Our cars were in the driveway because we rented a car. Then they searched our house and saw baby stuff and they were scared a baby was in the house,” said Ms. Seppala.

Once the fire department arrived, they determined that they thought the self-regulating attic fan short-circuited, starting the fire in the attic. “When the attic gets too hot it turns on to cool it down. So really, there’d be no way for us to know it was working,” said Ms. Seppala. Even if Ms. Seppala would have been home, the fire wouldn’t have been preventable.

The fire was tamed and put out and the firefighters left. That Friday night the fire department returned to the house to verify that the fire was out. “It wasn’t fully out so they sprayed foam which is supposed to soak in better,” said Ms. Seppala.

Sometime after they left for the night, the untamed fire spread down the walls from the attic all the way to the basement, possibly through the insulation. “Our insulation is cellulose which is basically recycled newspaper, so you can imagine how flammable that is,” said Ms. Seppala.

The Seppalas arrived home shortly after the fire department arrived around 5 a.m. “What remained of our house was smoking. They were spraying it and hammering through walls,” said Ms. Seppala.

The fire department allowed Ms. Seppala to stand inside the doorway and peak in the house, but nothing more. “I stood in the doorway for a minute and my glasses fogged up from the heat and I smelled like smoke the whole day,” said Ms. Seppala.

A couple special items like the Seppalas’ wedding albums and laptops were retrieved from the house by the firefighters. One of the Seppala’s two cats was found dead under the bed. “I knew exactly where she would hide,” said Ms. Seppala. “I think the other one would run out the door.” Her second cat is still missing. Thankfully Ms. Seppala took her dog on vacation with her so he was safe.

Sunday morning, the Seppalas returned to their house to take some pictures. They arrived to find two more fire trucks parked outside and more smoke coming from the house. For a house fire to rekindle over the span of days is relatively rare; however, Ms. Seppala cannot say enough about how thankful she is for all of the firefighters hard work. “We have a lot of firemen in the family¬¬—my grandpa and great-grandpa. I’m truly thankful for those firefighters,” said Ms. Seppala.

The outside of the house is about all that was salvaged. The interior of the house was completely destroyed. “Every inch of the house is either burned, smoldered, melted, or water damaged,” said Ms. Seppala. The only possibility of salvaging anything are the large storage bins filled with items in the couple’s basement.

The current plans are to have the house bulldozed and start building again with a fresh slate. “We’ll have a new safe house for a baby. It really is a large blessing in disguise,” said Ms. Seppala.

Currently, Ms. Seppala and her husband are living with Seppala’s parents in Ham Lake. The couple has a few options about where to live next. “Our insurance company is looking for houses around where we lived,” said Ms. Seppala. “We could always stay with my parents or find an apartment.”

Ms. Seppala said that it’s a hard decision deciding whether to stay with her parents or find another place. “It would actually be really nice to have help from my parents when the baby comes, but then again I may like to have the independence of having our own place,” said Ms. Seppala.

Some of the items lost in the fire that hold the most importance to Seppala is “the stuff that can’t be replaced.” Ms. Seppala and her husband lost the hard drive that they had put all of their pictures they had ever taken on. “We thought we were being smart by having them all in one place,” said Ms. Seppala. Other special things like Grandma’s china and a Disney collection of “everything Disney” given to Ms. Seppala by a close friend who had decided not to have children were lost in the fire.

The community at BSM has been quick to lend a helping hand to Ms. Seppala and her family. The school has collected gift certificates, money, baby clothes, and toys for the Seppalas. “BSM has been absolutely amazing! I can’t describe in words what it has meant to me,” said Ms. Seppala. “BSM isn’t just a workplace; it’s a community and family that truly cares for you. If we didn’t have that, this whole process would be far worse,”