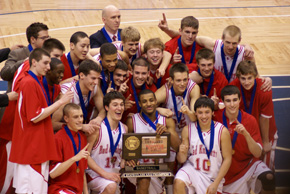 It was the perfect ending to a perfect season for the boys’ basketball team. Just one year after enduring a crushing loss to St. Thomas Academy in the state final, the boys got their revenge and their first ever state championship, defeating the Cadets 58-52.

The Red Knights got off to a fast start thanks to their seniors, building an early double figure lead and going into halftime up 35-21. Matt Thomas knocked down two threes, Stu Neville blocked several key shots and added an emphatic dunk, while Jordan Taylor and Armond Battle had their usual stellar performances.

But the Cadets chipped away at the lead in the second half, hitting four timely three-pointers to keep them in it. The game appeared to be out of reach when BSM was up seven with 36 seconds to go, but some questionable calls and scrappy play by St. Thomas made it a little too close for comfort.

The drama started off of a BSM missed free throw. Senior Stu Neville was called for a touch foul, and senior Cadet Alex Schneider, who led St. Thomas with 27 points, made the first free throw but missed the second. Then, senior Michael Fitzgerald grabbed the rebound for the Cadets, and drew another touchy foul on BSM, this one on Jordan Taylor. Yet again, St. Thomas knocked down its first free throw and missed the second, and yet again, the Cadets crashed the offensive glass, as the rebound was tipped in by Schneider. With only four seconds going off the clock, the lead had been cut from seven to just three points. “You want to play to win, not to lose, and I think we got into that a little bit,” said Taylor.

From there, the Red Knights put the ball in the hands of Taylor, who Coach Moore describes as “the best player in the state.” The senior ended his storied career by knocking down three clutch free throws to put the game away and seal the state championship for BSM. “I’ve been working on that [clutch free throw shooting] since I was in third grade. My dad used to make fun of me and say I didn’t have mental toughness so I was sitting there thinking, ‘this is what I’ve prepared for,’” said Taylor. “Luckily I knocked a few down and we got the win.”

Just as it was in the first half, and has been all season, the seniors lead the way down the stretch. With seven minutes to go, the Cadets had cut the lead to six. From then on out, only seniors played for the Red Knights. “I’m an utmost believer in that senior leadership is what wins it,” said Coach Moore. “I just think it’s incredibly important.”