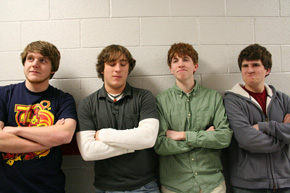 There is one team at BSM that doesn’t lift weights or run miles: the knowledge bowl team. They merely practice up on their “nerd” skills and, recently, they demonstrated the success of their skills by receiving ninth place out of 100 teams.

The knowledge bowlers are preparing for regionals which will take place on Tuesday, March 11. “I’m way excited for what’s coming up. I think we’ll do alright—we’re pretty good, but here are some pretty big nerds out there,” said senior Michael Kelly-Goss.

The team hopes to have the chance to attend state; at regionals, the top five go to state and “there are four powerhouse teams, so we have a chance for the fifth spot,” said Mr. Wallestad, knowledge bowl coach, “there are only fifteen at regionals, and they are all really good teams.”

Conference for knowledge bowl was recently held, and BSM was the champion, winning by eight points. Unsurprisingly, this was their third consecutive championship at conferences, as the BSM knowledge bowl team has a smart group of participants.

The team also competed in quiz bowl this year and went to state, an accomplishment the team has never achieved before. “We lost our first round against Wayzata, but it was still the best we have ever done,” said Mr. Wallestad.

During practice, “we read a lot of sample questions from the last ten years. The odds are, the questions we ask won’t show up, but it’s good practice,” said Mr. Wallestad, “practices are more about building a team, having fun, and giving people a place to belong. It’s not like we make them run sprints or anything.”

However, each knowledge bowler is required to have a large amount of knowledge in several fields in order to be successful; “we answer questions about all sorts of things: science, math, history—we’ve got it all,” said Kelly-Goss.

This year’s team is fairly large but it is made up of “mostly seniors, so next year we’ll have a small team,” said Mr. Wallestad. But the team is still proud of its successes this season and hopes the year will finish well at regionals.